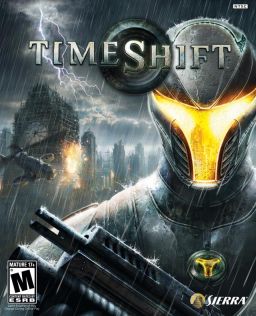 TimeShift is a 2007 video game, a Science Fiction First-Person Shooter game developed by Saber Interactive and published by Sierra, their second game after Will Rock. The general plot is that the Bad Guy, Dr. Krone[1], uses a prototype time-traveling suit (known as the Alpha Suit) to go back in time and rewrite history as they see fit, with the protagonist (an unknown "scientist") traveling back to stop him in the Beta Suit. Is notable for its focus on time altering powers.

A sequel was heavily hinted at during the end credits via messages from the Beta Suit's computer, and there was a very appropriate Cliff Hanger ending, but it never materialized.

Has a wiki that is need of work here.

Tropes used in TimeShift include:
Retrieved from "https://allthetropes.org/w/index.php?title=TimeShift&oldid=1724564"
Categories: