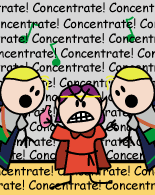 Sometimes, "help" can be more trouble than it's worth.

Every gamer knows the scenario: It's taken you the best part of three hours to get to this stage of the game. Your mission involves skill and dexterity, but that's all right—you're a professional by now. A few more seconds and you're home free. Sneak behind the guard... good, he didn't see you. Now go left... move forward... you're almost safe...

Bang goes your concentration. You were so focused that the whiny voice that just screeched from the screen made you jump five feet in the air. Worse, you dropped the controller and made your character bolt from his hiding place and fire the gun. Now every guard in the vicinity is beating you to a pulp. Game Over.

Who was responsible for your last nanosecond failure? Was it The Dragon? A cunning mole? An agent of the Big Bad, programmed by the AI to be unbelievably skillful, with flawless timing? Nope, it was your Exposition Fairy, and it just couldn't keep its damned mouth shut for two more seconds.

It can't be simple coincidence that so many characters that are meant to "help" you sport irritating voices, social ineptitude and the worst sense of timing on the planet. It has to be a conspiracy. It's also sadistic -- in the game manual, it says that this character is a loyal best friend or devoted assistant. He's there to help you. You wish he wouldn't.

The character that has you screaming "Stop helping me!" is usually an Exposition Fairy who either has an attitude problem or interrupts when you really wish they wouldn't. Sometimes it's a party member who's a master of the Useless Useful Spell—or who keeps getting overexcited and killing you with friendly fire. In extreme cases, it's the character the player is controlling, if they're annoying/inept enough; stupid catchphrases and idiotic behavior during cutscenes have resulted in many a player wasting a life by directing their playing character off a cliff, just for revenge.

Unfortunately, these annoyances are never disposable characters. You're stuck with them for the entirety of the game. The best you can hope for is that they do a Face Heel Turn and become the bad guy's problem. In fact, sending them to the opposite faction might be a good tactical maneuver on your part. However, in that instance, Murphy's Law will kick in and they'll be just as effective fighting against you as they were ineffective fighting for you. C'est la vie. At least you don't have to listen to their voice constantly and you finally have that excuse to kill them that you've been waiting all game for.

In fact, most "guide" characters will try the player's patience if they've played the game through a couple of times—like the tutorial levels, they're not really needed after the first play through. And maybe not even then.

This should go without saying, but try to avoid sticking AI sidekicks in here that are simply not perfect. If they can pull their own weight in a fight, but have different priorities and thresholds for doing things than a player might, then they probably don't belong here. (Complaining that the computer is trying to use its healing items on you earlier than you necessarily want it to, for example, does not put them in Stop Helping Me! territory—especially in a game without a Hyperspace Arsenal.)

Compare Escort Mission, Offending the Creator's Own, Worst Aid. Compare Mission Control Is Off Its Meds, where the voice is intentionally designed to be unhelpful or confusing. Related to For Your Own Good and Don't Shoot the Message. When it happens regardless of what is happening, it's Continue Your Mission, Dammit!

Examples of Stop Helping Me! include:

Retrieved from "https://allthetropes.org/w/index.php?title=Stop_Helping_Me!&oldid=1913852"
Categories:
Cookies help us deliver our services. By using our services, you agree to our use of cookies.