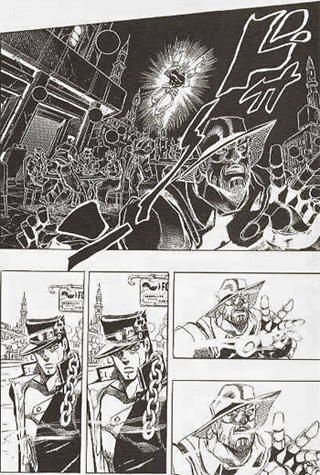 Color-coded for your convenience.

Time freezes (or seems to) for everyone and everything in the entire universe, except for the main cast of the story. The characters find themselves in an eerie, calm, silent world where the people and objects around them have become motionless statues. In some stories, this phenomenon happens by accident; in others, the heroes can stop time by using magic, a super power or Applied Phlebotinum.

In some cases, a world frozen in time is depicted in deliberate monochrome, perhaps evoking a visual analogy of a still photograph. When time starts moving again, expect colour to gently flood back into the world. Another color pattern often used is color reversal—whites become blacks, greens become reds, and so on.

Occasionally Handwaved by saying that the characters aren't really stopping time, they're just speeding themselves (and their minds) up to a point where everything else seems stopped. To emphasize this, sometimes you'll get a shot of something that should move really fast, like the wings of a hummingbird, moving very slowly. This means that the illusion of time standing still can be achieved with enough raw Super Speed. And sometimes it goes the other way, with time manipulation being the explanation for a character's Super Speed. Of course, if they're really going that much faster than everything else, they would need lots of Required Secondary Powers to move normally.

More rarely Handwaved or semi-justified if the character's power behaves like a personal alcubierre drive, allowing time to progress normally within a set radius around the character while it has stopped or slowed for the rest of the world. This also gives an excuse to have projectiles fired or thrown by a character stop in midflight at the edge of the zone of normal time.

Tends to require (often contrived) reasons for the character not being able to win every fight they ever participate in... which, depending on how Super his Speed really is, could be every single fight in a city, country, or planet. Usually doesn't offer any reason whatsoever for the character being able to move through and breathe time-frozen air, see despite the time-frozen light and such.

Compare Super Reflexes and Year Inside, Hour Outside. Can be a result of Caffeine Bullet Time. Not to be confused with Frozen in Time. Also not to be confused with the Degrassi episode. Sometimes may be visually represented as a Color-Coded Timestop. Can be used to justify an extreme Speed Blitz. Often ends with Un Paused. The Air Not There is a related trope.

Not to be confused with the songs by Blind Guardian, Rush, or The All American Rejects.

Examples of Time Stands Still include:

Retrieved from "https://allthetropes.org/w/index.php?title=Time_Stands_Still&oldid=1726818"
Categories:
Cookies help us deliver our services. By using our services, you agree to our use of cookies.