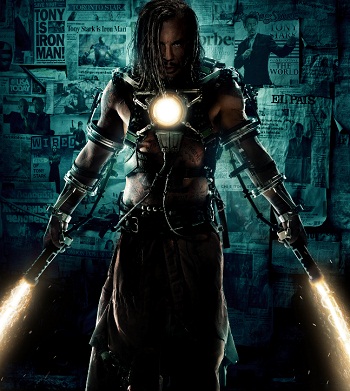 You got to whip it...whip it good!

The Phlebotinum is applied to a character's clothes instead of himself.

Having superpowers built into a magical or technological garment instead of inherent to a character is a common element of Superhero stories and other speculative fiction. It allows an otherwise fragile Muggle whose only outstanding skill may be smarts to play with the big dogs. It allows a mundane hero, closer to the common man than a mutant, alien, or cyborg. It provides a hero with a creamy center that bad guys can exploit, and provides a plausible reason for the Secret Identity to be vulnerable. Normally, technological super suits surround the character completely, covering 100% of his skin, and are hermetically sealed. In this way, the suit is doing all the work, and the operator is simply pushing its actions from within.

The most straightforward version of the super suit is "Power(ed) Armor", a miniature Humongous Mecha—how's that for an oxymoron? These use some form of mechanical system, like artificial muscles, electric motors, or hydraulics to drive their actions. They may be controlled by positive feedback, responding to the operator's body movements to keep the pressure in the suit balanced, or they may use a mind interface, either wireless or cybernetically implanted. These suits are hard, armored and inflexible, making them hard to wear under civvies or pack for trips. These are the most likely to be mass-produced in a Sci Fi setting, as a souped-up space suit, hostile environment gear, or infantry body armor.

Moving out from there, we find the "soft" super suit, based on some form of "smart materials", nanotechnology, magic, or even living tissue. These can often morph or reassemble themselves, and can be folded, stored and perhaps even machine washed.

Single articles of clothing that add powers are also common. Typically, they empower the part of the body on which they are worn, but they can also have peripheral effects; gauntlets of super strength usually also reinforce the legs and back, for instance. These are almost always magic, and can often be mixed and matched.

When headwear has this effect, it's a Hat of Power. Can sometimes be a form of Upgrade Artifact. No matter the type, if it's worn by a woman, expect Stripperifficness. If metal is part of it, then expect Elemental Crafting. If jewels are a part of it, then expect Power Crystals. If the clothes cannot be removed, it's a Clingy Costume. Contrast Frilly Upgrade. For suits that work with powers but do not provide them, see My Suit Is Also Super. In general these are a case of an Amulet of Concentrated Awesome for obvious reasons. A very mild video-game example would be Stat Sticks.

Not to be confused with Clothes Make the Legend.

Examples of Clothes Make the Superman include:

Retrieved from "https://allthetropes.org/w/index.php?title=Clothes_Make_the_Superman&oldid=1632835"
Categories:
Cookies help us deliver our services. By using our services, you agree to our use of cookies.