Everything About Fiction You Never Wanted to Know.
(Redirected from Two Plus Two Makes Five)
Jump to navigation Jump to search 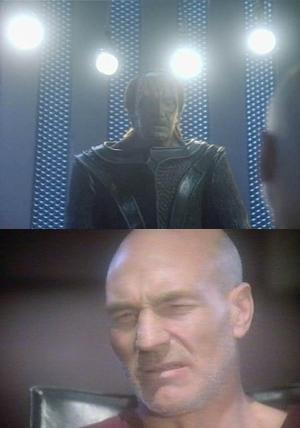 "I asked how many lights you see." "There are four lights." "I don't understand how you can be so mistaken."

Nazi theory indeed specifically denies that such a thing as "the truth" exists... The implied objective of this line of thought is a nightmare world in which the Leader, or some ruling clique, controls not only the future but the past. If the Leader says of such and such an event, "It never happened" -- well, it never happened. If he says that two and two are five -- well, two and two are five.
—George Orwell, "Looking Back on the Spanish War," four years before Nineteen Eighty-Four

Most often used as a torture trope, probably influenced by the famous scene from Nineteen Eighty-Four, the villain has the hero in his clutches, but the hero Simply... Won't... Crack. Sometimes the villain has to do more, i.e., he has to make the hero's mind break. This means making the hero see things that aren't there or being forced to acknowledge things that are contradictory or illogical, sometimes through using Cold-Blooded Torture or Mind Rape.

The villain needs to make him believe that 2 + 2 = 5. It is said that the Truth will set you Free, and when truth loses all meaning, it becomes just another method of Orwellian Mind Control.

Perception is Truth. Black is White. Wrong is Right. Right is Left.

Often occurs in a society where Big Brother Is Watching. A good way of procuring a Manchurian Agent or otherwise Brainwashed drone; if you can break someone down so much that they end up believing this, then you can put them back together however you want.

Note: This trope has nothing to do with actual math or equations. All examples of 2 plus 2 actually equaling 5 should go here.

Examples of Two Plus Torture Makes Five include:

"Once it's proved to you that, essentially speaking, one little drop of your own fat should be dearer to you than a hundred thousand of your fellow men, and that in this result all so-called virtues and obligations and other ravings and prejudices will finally be resolved, go ahead and accept it, there's nothing to be done, because two times two is-mathematics. Try objecting to that."