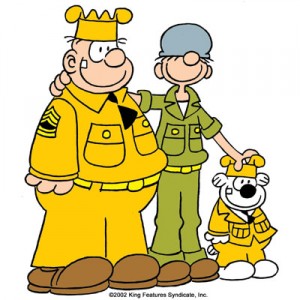 They didn't usually get along this well...

Beetle Bailey is a newspaper comic that started in 1950, by Mort Walker. Originally it was about some people Walker went to college with, and was set in a university. However, when that idea didn't prove very successful he decided to change it into a military comic instead, drawing on Walker's experiences in the army.

It's got an incredibly diverse cast that increases as the years go by, possibly in attempts to boost low ratings or to keep up with the times. The comic used to deal with military issues that were either somewhat relevant, or were funny to those who were already in the army. The series is now run by Mort Walker's son, and much of the tone and theme of the strip, over the last couple of years has divorced itself from reality in terms of having Beetle and his fellow soldiers remain stationed within the US, oblivious to the wars currently waging in the Middle East.

The comic was criticized fairly often through the years due to the sexist way women were portrayed. Though the creator has taken steps to fix this, some sexist aspects still remain.

As said before, there's a rich cast of characters, but here's a list of the ones most commonly seen:

Beetle: The protagonist of the comic though he doesn't have all that many protagonistic qualities. He isn't the ideal soldier: He's lazy, fairly mouthy and always gets on Sergeant Snorkel's nerves.

Killer: One of Beetle's best buddies, and he's a real ladies' man...apparently. If Beetle's seen in the comic with a friend, it's usually going to be him.

Sergeant Orville "Sarge" Snorkel: The Sergeant of Company A, the company of soldiers that Beetle and others are part of. Sarge is a real piece of work, full of character flaws and issues that the comic's creator may or may not be aware of.

Otto: Sarge's dog, and quite a bit like his master. Often he gets quite a bit of viewing in the comic.

Ms. Buxley: General Halftrack's beautiful secretary. She used to be as dumb as a post, but has developed some since the whole sexism criticism thing. She usually works with Ms. Blips, Chip Gizmo, and the officers of the camp. She seems to be dating Beetle now, even though there wasn't much to their relationship before a few years ago.

General Amos T. Halftrack: The comander of Camp Swampy. While he has all this power, he's still bullied and henpecked by his wife and so has a lot of pent up sexual frustration. He plays golf every afternoon, really enjoys his liquor, and spends a lot of time thinking about his secretary. The latter caused the media to require him to take Sensitivity Training. These days he's more subtle about it.

Plato: The Professor of the camp, somewhat portly with Nerd Glasses. Not much more ambitious than Beetle, but better at staying out of trouble.

Zero: The Fool, a Dumb Blond with buck teeth. His usual role is to be given an order by Sarge embellished with a careless metaphor, which he will proceed to carry out in the most literal manner possible (e.g., if told to "Make it snappy," he will embellish the project with mouse-traps and snapping turtles).

Tropes used in Beetle Bailey include:
Retrieved from "https://allthetropes.org/w/index.php?title=Beetle_Bailey&oldid=1759857"
Categories:
Cookies help us deliver our services. By using our services, you agree to our use of cookies.