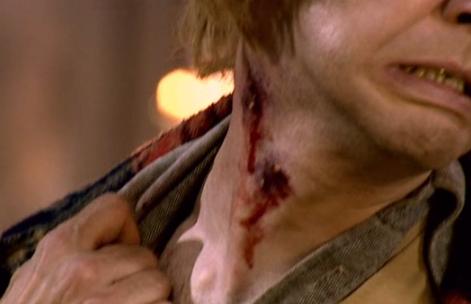 
Dracula: Nah, see, that's a myth. Dracula scrape with his fangs and lick up the blood. Like this... [demonstrates] See, scrape and lick. Scrape and lick. like a kitten drinking milk.
—The Grim Adventures of Billy and Mandy, "Fear and Loathing in Endsville"

Vampires need blood to survive. Some can survive on the blood of lesser creatures—rats, cats, dogs, etc. But their beverage of preference and choice is almost always human blood.

Humans who have encountered a Friendly Neighborhood Vampire may count themselves lucky, as the Kiss of the Vampire is at worst, a tolerable experience, and at best, as good as or Better Than Sex.

The vampires who aren't quite so humane or human-friendly, though, don't much care for whether their prey enjoys it. They likely won't survive the experience to care, as these vampires don't bother with table manners, let alone leaving two dainty, easily covered puncture wounds. They go for the jugular, and if the rest of the neck goes with it, c'est la mort.

The Gory Discretion Shot is seldom used with a violently hungry vampire, so the viewer is treated to seeing the High-Pressure Blood fountaining everywhere, and the police or intrepid meddling kids are treated to the messy aftermath. Where this can get really torturous is if the vampire is into Hemo Eroticism, because then they'll draw out the feeding process.

See Our Vampires Are Different, and Kiss of the Vampire for the flipside of this trope.

Examples of Vampire Bites Suck include: