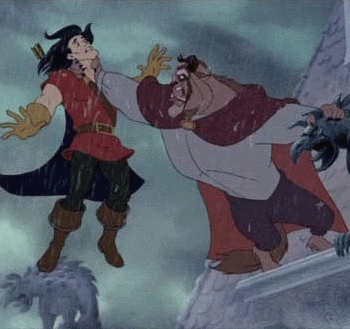 No one gets hit with this trope like Gaston!

Sometimes a character needs to demonstrate his or her strength by making some poor schmuck feel helpless. The standard method of demonstrating Super Strength is to grab the victim by the neck with one hand and pick him up. If you want to maintain a slight atmosphere of plausibility, you can then slam him up against a wall. To be truly Badass, however, you should simply hold him in mid-air, using sheer force of personality to keep him from realizing that he can escape simply by tilting his head back. You may even decide to shake them a little bit.

Victims of this demoralization technique are typically helpless, unable to resist in any fashion despite the fact that the attacker has generally put them in a position to deliver a solid kick (or punch) to an assortment of vital targets. Of course, meanies with the strength to pull off this trick often have Nigh Invulnerability as well.

May or may not come directly before a Neck Snap—typically, though, a Neck Lift is a way to show that you're serious about this and won't take any bull. Can also be a You Fail Physics Forever, if a human-sized lifter doesn't even lean back to counterbalance the weight they're holding up.

For added effect there can be a shot, image, or description revealing just how high the attacker can lift the victim's feet from the ground.

Examples of Neck Lift include:

Retrieved from "https://allthetropes.org/w/index.php?title=Neck_Lift&oldid=1889926"
Categories:
Cookies help us deliver our services. By using our services, you agree to our use of cookies.