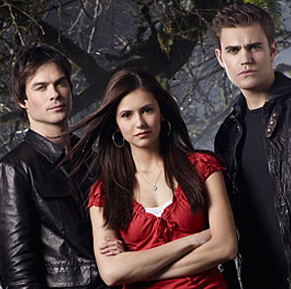 Written by L.J. Smith, The Vampire Diaries tell the story of Elena Gilbert and her relationship with two vampire brothers. At the very beginning, Elena is still suffering from losing both her parents in a car crash she managed to survive. Her world is turned upside down by the arrival of a new student, Stefan Salvatore, to their sleepy little town.

The original series consisted of a trilogy published in 1991, consisting of the volumes The Awakening, The Struggle, and The Fury. A fourth book was published in 1992, Dark Reunion. After a long hiatus, in 2009, L. J. Smith wrote Nightfall, Shadow Souls and Midnight, part of The Return trilogy. But then in 2011, Alloy Entertainment fired her over creative differences[1], and the next books (in The Hunters and The Salvation trilogies) were ghostwritten. Since then, L. J. Smith wrote the Eversong trilogy, her own continuation of The Return.

The series has been adapted for the screen in the form of a television show on the CW, albeit with some significant changes. It's now[when?] on its seventh season. And some fans are crying foul on the treatment of the show.

Tropes used in The Vampire Diaries include:

away instead of, say, following her after she left the bar ands ripping her heart out. Naturally she waited until the moon rose and came after him.]]

Retrieved from "https://allthetropes.org/w/index.php?title=The_Vampire_Diaries&oldid=1826269"
Categories:
Cookies help us deliver our services. By using our services, you agree to our use of cookies.