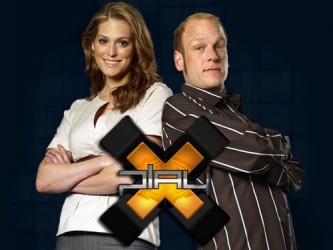 X-Play is what happens when a Sketch Comedy meets a video game review program. It was the only show to survive the TechTV/G4 merger, one of the last two original shows the network had (alongside Attack of the Show!), and was one of the highest-rated programs on G4.

The show started in 1998 (on what was then called ZDTV) as GameSpot TV; it was hosted by Adam Sessler and Lauren Fielder, the latter of which left in 1999 and was replaced by Kate Botello. In 2001, the show was renamed Extended Play (at around the same time ZDTV was renamed TechTV). Shortly after Botello left the show, it was hosted by Sessler alone, and it was filmed San Francisco's Metreon arcade until 2003 -- when the show was renamed X-Play and Morgan Webb came aboard. Along with Webb came a brand new studio and the beginning of the show's focus on game-related sketch comedy alongside its reviews. The show was retained by G4 after that network purchased TechTV in 2004, and even though it was basically left intact (a fate far better than other TechTV shows (and even most G4 shows) received), its focuses swung frequently for the next few years as G4 went through its frightening Network Decay. The show became essentially a half-hour version of what G4 was before the merger. It is now comprised of news, previews, reviews, interviews, and even a hints segment called "Cheat!" (which itself was a half-hour show on G4 years ago). The sketch comedy has also been done away with, for the most part; this might have something to do with the fact that the show's former head comedy writer, comedienne/comic nerd Blair Butler, became a G4 on-air personality.

On April 26, 2012, Sessler abruptly left G4 over what's believed to be a contract dispute, which put the future of X-Play in question. Sessler's last episode aired later that day, after the news broke, and there's Wild Mass Guessing as to where he'll end up next.

Tropes used in X-Play include:

We give this All The Tropes page two presses of the "random" button...out of five.

Retrieved from "https://allthetropes.org/w/index.php?title=X-Play&oldid=1831949"
Categories:
Cookies help us deliver our services. By using our services, you agree to our use of cookies.