Everything About Fiction You Never Wanted to Know.
(Redirected from The Force Unleashed)
Jump to navigation Jump to search 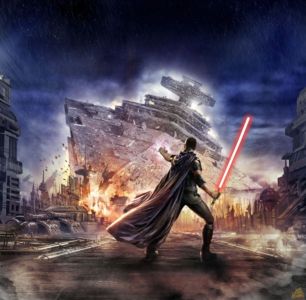 Surprisingly, this is the worst moment in the game. Except in the Wii version. Then it's as awesome as it should be.

A Star Wars-based multimedia project, like Shadows of the Empire eleven years before it. Covers a wide range of mediums including Comic Books, a novel (by Sean Williams), action figures and a Role-Playing Game, but the Video Game has received most of the attention. The new feature that has been paraded around is an advanced graphic and physics engine, allowing visuals and gameplay features that were impossible before. The environments are huge and you are capable of manipulating (and destroying) almost anything. You know some of the things Mace Windu and Yoda do in Star Wars: Clone Wars (flinging around star fighters, ripping apart armies with little trouble)... it's kind of like that.

The basic story of TFU centers around Darth Vader's secret Sith apprentice, born Galen Marek but codenamed "Starkiller", and explores his role in the Star Wars universe. Set during the time period between Revenge of the Sith and A New Hope, he ends up interacting with various canon characters and fills in new details.

Reviews for the game were mixed, with most complaints being a tricky targeting system for flinging objects around and that some of the large creatures were defeated using the exact same methods. Surprisingly the story has been given significant praise, which is unusual for a Star Wars original video game (they are usually an Excuse Plot with some fun action and characters).

A Downloadable Content pack entitled the Ultimate Sith Edition adds a What If story based on the Dark Side ending, that allows the player to screw around with the canon, with Starkiller proceeding to hunt down and destroy characters such as Obi-Wan Kenobi and Luke Skywalker.

A sequel has been released that continues the exploits of Starkiller. Concerning his death in the first game, this character is supposedly a clone. But the game's story revolves around him trying to learn the truth.

That Other Wiki has more information. The other other wiki might help too.

Tropes used in Star Wars: The Force Unleashed include:
Retrieved from "https://allthetropes.org/w/index.php?title=Star_Wars:_The_Force_Unleashed&oldid=1887934"
Categories:
Cookies help us deliver our services. By using our services, you agree to our use of cookies.