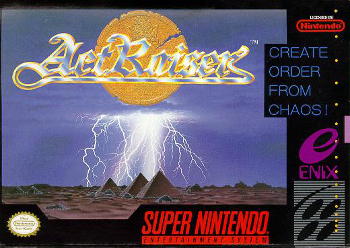 Creating order from chaos since 1990.

ActRaiser is a platforming slash sim game released in 1990 for the SNES, developed by Quintet and published by Enix (now Square Enix). You are a Sealed Good in a Can god named The Master (apparently the Abrahamic God, but only in Japan), sent into a nice nap after Tanzra (also known as Satan, but again, only in Japan) and his minions beat you silly a very long time ago. While you were sleeping, Tanzra and pals divided your world amongst themselves, and your godlike powers found themselves drained, due to your worshippers abandoning ship.

As the game begins, you awaken from your slumber, bent on thrashing monsters and regaining your followers, which is accomplished through side-scrolling platform action and SimCity-like overhead village construction, respectively.

A sequel was made which dropped the city maintenance aspect of the game, which was one of the main things that made the original stand out amongst similar side-scrolling action games. It was not as well received, or remembered. However, this game did pave the way for what would become one of Enix's greatest, loosest trilogies -- Soul Blazer, Illusion of Gaia, and Terranigma.

Tropes used in ActRaiser include:
Retrieved from "https://allthetropes.org/w/index.php?title=ActRaiser&oldid=1669559"
Categories: