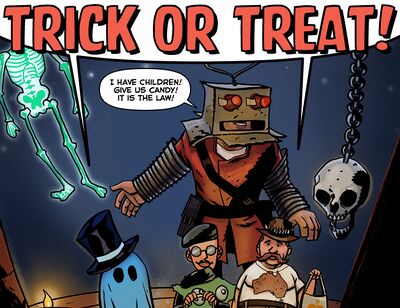 The only day of the year that it's okay to demand candy from strangers.

All Hallows' Eve. All Saints' Eve. Samhain. October 31. Whatever you call it, and whether you like it or not, Halloween is a holiday that has almost ingrained itself into American life and, in turn, the global culture.

If you're looking for the slasher flick, then please proceed to Halloween.

Halloween is short for All Hallows' Eve, meaning the eve (or evening) before All Saints' Day. Originally, in the seventh century, it was celebrated in May or April, right after Easter. A few centuries later it was shifted to November.

At one point, folklorists claimed it was descended from the Irish pagan festival of Samhain (pronounced "sah-win"). However the Irish celebrated All Saints' Day in April, as, indeed, the Orthodox Churches do to this day; indeed, they celebrated it in April years after other Christians had changed it, perhaps to keep it free from associations with Samhain. The celebration of it in November originated from the German, who are not even a Celtic people.

Works of fiction often claim that it was derived, nonetheless, and often claim Samhain was a general Celtic feast, when it was in fact unique to the Irish. As indeed do allegedly fact-based newspaper articles on the feast.

Halloween was imported to the US and Canada in the 19th century, a time that saw substantial Irish and Scottish migration to the New World. Back in this time, Halloween in North America was more of a celebration of Irish and Scottish heritage than anything else, much like Columbus Day is for Italian Americans. It was celebrated with large feasts, apple bobbing, and divination games, as well as pranks and mischief. By the turn of the century, the "pranks and mischief" had become the defining feature of Halloween, turning it into a night of vandalism. As a result, the Boy Scouts and neighborhood groups started working to turn Halloween back into a safe celebration, organizing trick-or-treating events based around the old practice of "guising" to redirect the focus of the festivities away from violence. With Halloween now becoming a popular celebration outside of Irish and Scottish neighborhoods, retailers seized upon a brilliant opportunity to have a new holiday to commercialize. While there was some commercialization going on before (mass-produced costumes were appearing in the 1930s), it really took off after World War II, and it hasn't stopped since.

Today, Halloween is considered a major holiday in the US, Canada, Mexico (where it has a more Catholic bent, as it falls right before the Día de Muertos celebrations) and the British Isles (where it is more strongly influenced by the older traditions, particularly in Ireland and Scotland). It has also caught on in mainland Europe and, more recently, in India and Japan through exposure to American media. Some Western countries, however, pay little attention to the holiday, feeling it to be an unwanted American import that has little relevance to them—examples include France, Switzerland and Australia.

Candy apples (apples coated with caramel or toffee) used to be a popular treat, but that ended due to a scare in The Eighties over people putting razor blades, needles or poison in the apples. In reality, the only proven cases of people deliberately spiking kids' candy with poison or drugs were crazy parents who were trying to kill their own children (and one of the most famous cases involved Pixi-Stix, a "safe" wrapped candy), not strangers handing out poison at the door. Hiding pins or needles in Halloween candy has been known to happen several times, but usually as a prank by one's friends—and it can just as easily be done with a wrapped Snickers bar as with an apple. There certainly wasn't any conspiracy by Satanic cultists to murder children as sacrifices to the Dark Lord, as has been claimed.[1] So basically, nice job ruining our fun, assholes.

For those with a smaller budget than the big amusement parks, the Haunted House (or abandoned factory, Prison, mental asylum or other spooky place) is a popular attraction, as are the haunted hayride, the corn maze and the haunted trail in less urban areas, with people jumping out of the shadows to scare the bejesus out of the visitors. The "scariness" of attractions varies widely, depending on the target audience—some may be family attractions (the haunted hayride in particular is seen as this), while others are most definitely not recommended for children or those with weak stomachs. In recent times, due to their popularity, many major haunted attractions have grown to be highly elaborate and sophisticated, with Hollywood-quality special effects and production values.

A popular Urban Legends claims that there exists a haunted attraction somewhere in the country that is so scary, it offers cash rewards or full refunds to anybody who can complete it—and of course, nobody ever succeeds. Sometimes, the legend claims that the reason why it's so scary is because the performers are allowed to touch and even physically restrain the guests. To the best of our knowledge, such a place does not exist, though as described above, people have tried their damnedest to come close. And in any event, direct contact with the guests can easily cause an accident that can lead to a lawsuit, which is why, even at the most thrilling haunted attractions, the performers stop just short of doing this.

However, in some places (most notably Detroit and the north of England), Mischief Night is associated with far worse cases of vandalism, including arson, putting fireworks in mailboxes, breaking windows, and setting fires in the street. As a result, the police tend to step up their patrols on October 30 to deter vandals. In addition, some parts of the UK put age restrictions on buying items like eggs, flour and toilet paper around Halloween, in order to prevent under-16s from buying such items for vandalism. Alternative names include Devil's Night, Gate Night, Goosey Night, Cabbage Night and Mat Night.

TV channels, particularly cable channels, run marathons of horror films for weeks, from the old classics (Dracula, Frankenstein 1931, The Wolf Man) to modern ones (Friday the 13 th, A Nightmare on Elm Street, The Exorcist, Dawn of the Dead, Scream and, of course, Halloween), as well as shows like The Addams Family and The Twilight Zone. It's the Great Pumpkin, Charlie Brown is usually on the air somewhere, as are other classic Halloween specials. Most long-running TV shows do at least one Halloween Episode during their run; among the most famous Halloween episodes are The Simpsons' annual "Treehouse of Horror" anthology episodes.

Remember what we said up at the top of the page about how Halloween is (allegedly) descended from the Celtic pagan festival of Samhain? Well, there are some people and places that don't take too kindly to this little tidbit.

For the most part, Catholics and mainline Protestants are tolerant of the holiday, seeing any ties to paganism as having long since been buried by centuries of Christian and secular tradition—after all, does anybody, apart from Jehovah's Witnesses, complain about the connections between modern Christmas celebrations and the pagan solstice holiday of Yule? To them, it is a harmless, secular holiday built around imaginary monsters and handing out candy. Catholic schools often hold Halloween celebrations, and a Vatican exorcist has said that the day is harmless. The Catholic and Anglican Churches may emphasize All Saints' Day, the celebration that comes after Halloween, while Protestants may celebrate Reformation Day—the day when in 1517, Martin Luther started The Protestant Reformation—which falls on the same day. However, these celebrations are usually held simultaneously with Halloween, rather than in opposition to it. The laissez-faire attitude that Catholics hold to the holiday makes sense—the Catholic Church was instrumental in Christianizing the holiday, and it was Irish Catholics who brought Halloween to America in the first place.

Some conservative Christians, however, feel that Halloween trivializes and celebrates the occult and is incompatible with the Christian faith. They point to its Celtic pagan connections, which they feel to be Satanic. There have been many religious challenges to and protests against the celebration of Halloween over the years, particularly in the "Bible Belt" region of the South and the rural Midwest. A recent tradition among conservative Christians has been to hold "Halloween alternative parties" in which people dress up as Biblical characters, and "Hell houses" as The Moral Substitute to regular Halloween attractions. At Hell houses, the attendees are shown scenes meant to portray the decadence of secular culture, finally ending in a room that represents either Heaven, which is the reward for not behaving in the manner just witnessed, or Hell, occupied by Satan, who claims that all of the characters they had seen (who usually reappear here) are now firmly in his grasp. Afterwards, in order to get out, the attendees must agree to be "saved" (become born-again Christians) or traverse the length of the building. In some cases, the Hell house is marketed as a normal haunted house, thus making it a Bait and Switch in which unwitting attendees don't realize that they're going to a fire-and-brimstone sermon until they're already through the door.

The same dichotomy exists within Judaism and Islam. The Orthodox Jewish and conservative Muslim views on the holiday are similar to the conservative Christian one—it has deep pagan roots, and is therefore incompatible with observance of Judaism or Islam. It is for this reason that celebrations of Halloween have failed to gain traction in the conservative Middle East. On the other hand, Reform Jews and the more secular and liberal Muslims[2] in the US and Canada tend to follow the more "who cares" view of their liberal Christian counterparts, holding it to be harmless fun that lost any semblance of being any religion's holiday once the marketers got a hold of it. Meanwhile, the Conservative Jews (as usual) stand half-here, half-there on the subject.

And finally, with so much controversy over its pagan history, what do actual pagans think about it? Celtic pagans (of both the neo-pagan and reconstructionist variety) consider the season to be a holy time of year, and make offerings to the gods and the ancestors. A fair number of Wiccans, however, feel that the modern, Western incarnation of the holiday is offensive—they see it as promoting old stereotypes and caricatures of "wicked witches" that serve to make people suspicious and fearful of real-life pagans and witches.

Examples of All Hallow's Eve include:

Retrieved from "https://allthetropes.org/w/index.php?title=All_Hallow%27s_Eve&oldid=1957519"
Categories:
Cookies help us deliver our services. By using our services, you agree to our use of cookies.