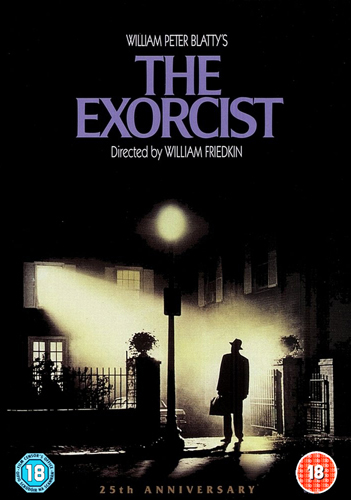 Based on a novel by William Peter Blatty, and inspired by what was supposedly (it's been disputed) an actual documented exorcism from 1949, The Exorcist is the terrifying, shocking tale of an originally rather cute 12-year-old girl named Regan and the efforts of her mother, a famous ex-actress, her mom's secretary Sharon, and a pair of priests to save the poor girl's soul from the ravages of a powerful, malign entity called Pazuzu.

Initially manifesting as strange behavior in little Regan and her Ouija-board trysts with an invisible companion calling itself Captain Howdy, the being's infiltration is at first dismissed as Regan acting out frustrations after her mother's divorce. As the demon takes hold of Regan, however, she undergoes drastic changes in appearance and behavior, manifesting physical symptoms and incredible strength that cannot be explained by medical science. After Regan starts gliding around the house on all fours face up, licking Sharon's ankles, her mother decides that it is time to consult a higher authority...

The following tropes are common to many or all entries in the The Exorcist franchise.
For tropes specific to individual installments, visit their respective work pages.

Retrieved from "https://allthetropes.org/w/index.php?title=The_Exorcist&oldid=1968306"
Categories:
Cookies help us deliver our services. By using our services, you agree to our use of cookies.