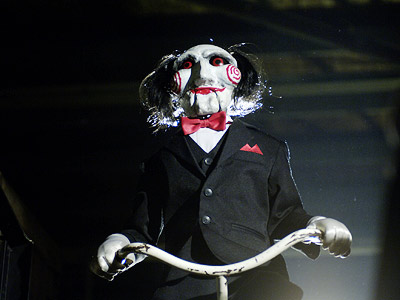 Hello, Troper. I want to play a game.

You've spent your life chronicling and reading of the lives of others, instead of living your own. Spent it locked in a basement room. You should feel at home where I've placed you today.

I offer you a chance to redeem yourself. And you'll even get a chance to put your skills to good use.

Below is a partial list of the tropes I've invoked in the movies amusingly depicting my efforts. If you can complete it - all of it, filling it with every cliché used for two seconds in my movies - you will go free.

You see? Tropes Will Enhance Your Life, by allowing you to continue living it. Sadly, if the list is not completed to my satisfaction...you have half a ton of solid metal hanging over you for a reason.

You have one hour.

A series of horror films that began in 2004 and ended in 2010. The films center around a Poetic Serial Killer, dubbed the Jigsaw Killer by the press, also known as just Jigsaw, who places people in Death Traps in which they must harm themselves to escape. The traps are designed to serve as poetic justice by reflecting what the Jigsaw Killer believes to be the victim's (or victims') flaw. To escape their traps, also known as "games", the victims must usually harm themselves (or others) in some horrific way, or else they will die a very gruesome death. The films center around both the victim's efforts to escape their traps and the Jigsaw Killer himself and his story.

There are eight installments (all released the week prior to Halloween, a series tradition), with the eight entitled Jigsaw and serving as a sort of revival and reboot for the series.

The films (especially the first) inspired many lesser imitations, though some argue Saw itself is a lesser imitation of Se7en, since both focus on the elaborate, grisly murders carried out by a man trying to send a message; a key difference is that Se7en's John Doe is portrayed as extremely vain and interested in showing the world a lesson through murder, not 'saving' his hapless victims. There are others who would argue that the concept of a moralistic serial killer playing God to a society he deems to be morally corrupt did not originate with Se7en. According to Word Of God, though, it was based on a short film of the same name. But character names and killings are pretty much the only things intact.

The series managed to spawn two video game adaptations. The first, Saw: The Video Game, is a side story which takes place after the events of the first film. (with a very disturbing cover, always placed near children's sections). Detective Tapp (thought dead after he was shot by Zepp) is the main character; not surprisingly, he is forced into one of Jigsaw's games and has to play to survive. The game's sequel, Saw II: Flesh and Blood, is placed between the events of the second and third films and follows the story of Detective Tapp's son, Michael, as he becomes a target of the Jigsaw Killer.

Warning: This page (much like this entire web site) contains no small number of spoilers. Many of the examples below will assume you know the spoilers revealed by the endings of Saw, Saw II, Saw III, and Saw IV, and those spoilers are frequently not spoiler-tagged. You Have Been Warned.

Tropes used in Saw include: