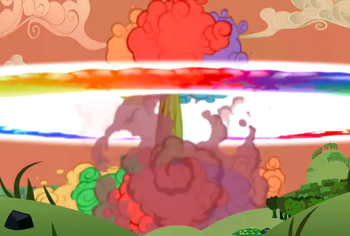 In a fantasy setting featuring Fantasy Gun Control, Medieval Stasis, and assorted other reasons why the culture would never develop anything even close to nuclear weaponry, there may be some form of magic attack so powerful and destructive that it is obviously a stand-in for nuclear weapons. Compare to how Automatic Crossbows stand in for guns. Kamehame Hadoken, Wave Motion Gun and Person of Mass Destruction are common ways of invoking it.

Elsewhere, this trope is about the deliberate insertion of something nuke-like into a civilization that hasn't even invented the steam engine yet. Like Fantastic Racism and Fantastic Drug, in that the situation is obviously designed to parallel a real world situation, either in order to make some point about the issue or simply to allow all the connotations and associations of the real world situation to easily be applied to the fantastic. In Japanese works, may be related to Nuclear Weapons Taboo.

Examples of Fantastic Nuke include:

Retrieved from "https://allthetropes.org/w/index.php?title=Fantastic_Nuke&oldid=1966916"
Categories:
Cookies help us deliver our services. By using our services, you agree to our use of cookies.