Our Zombies Are Different 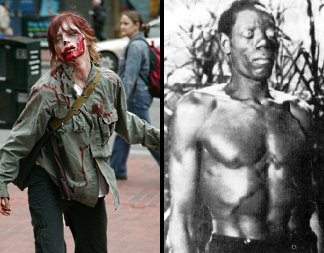 "Is there an agreed definition of what is a zombie and how they get that way? Not that I know of. I think zombies are defined by behavior and can be 'explained' by many handy shortcuts: the supernatural, radiation, a virus, space visitors, secret weapons, a Harvard education and so on."

"If you're going to get into every Tom, Dick, and rage virus reimagining of zombies, we will be here all night. Romero zombies are the only zombies; we literally cannot advance this conversation otherwise!"

The word "zombie" originated in the Voudon beliefs of the Caribbean, referring to a body "revived" and enslaved by a sorcerer. (Some of the oldest aspects of zombie appearance are actually symptoms of tetrodotoxin poisoning, a neurotoxin used in certain voudon rituals.) In this form, it has been known in America since the late 19th century. However, it wasn't until the 1960s that George Romero's Night of the Living Dead attached the word to the living dead who eat the flesh of the living. (Note, however, that the flesh-eaters in that movie are never referred to as "zombies," and Romero himself didn't consider them zombies, preferring "ghouls.")

As Night was accidentally entered into the public domain due to an error in the end credits, it quickly became the object of imitation and emulation by many other directors. Most zombie invasion stories, even those not explicitly based on Romero's films, follow the same conventions, though there are major points of contention. While Romero is responsible for most of the "general" zombie conventions, the more specific and visible zombie tropes are more often inspired by the later works of John Russo, Night's co-writer. Most zombie movies mix-and-match conventions from the Romero and Russo canons. The Russo canon in particular is the reason most people will respond with "Braaaiinnnns" when Zombies come up in conversation, and most depictions along those lines are references to it.

The most common zombie archetypes are as follows:

Skin color of zombies can also vary widely, ranging from normal color to greens, blues, grays and even other colors. Their gait can also vary, from limping, sliding their feet on the ground or have the "arms forward" stance.

See also Everything's Deader with Zombies, Zombie Apocalypse, Not a Zombie. Not Using the Z Word happens when creatures that otherwise fit the profile perfectly are not called zombies; Technically Living Zombie is what happens when they fit the profile perfectly except for not being dead. Elite Zombie is this trope combined with Elite Mook. Most zombies are Night of the Living Mooks, and Slave Mooks.

Examples of Our Zombies Are Different include:

Horse-man: Wait, he's a zombie but he's handsome? And he's an amazing basketball player? And he can FLY? What on earth makes him a zombie? What conflict does the story have?

"They appreciate gifts of cologne, perfume and other strong-smelling items--and believe me, you will want to give them these things."