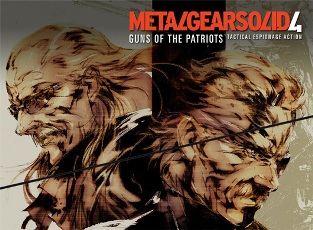 Metal Gear Solid 4: Guns of the Patriots, the seventh main series game of the Metal Gear storyline, launched on the Play Station 3 in mid 2008.

Nine years have passed since the Shadow Moses Incident. After Big Shell was destroyed, the world descended into near-anarchy: With the entire world's economy dependant on constant, ongoing warfare, the world's war zones are controlled by Private Military Companies, or PMCs for short, fighting proxy wars for the highest bidder. Connected to the 'Sons of the Patriots' network, which allows soldiers to share each others' senses, the PMCs are the pinnacle of military training and efficiency. A world of perpetual war where soldiers will always be needed and have a place, Big Boss' dream... or is it?

Moreover, the PMCs, the FROGS (an elite all-female unit separate from the PMCs), and the Beauty & the Beast Corps (four traumatized women "coping" through the use of cybernetic suits inside custom war machines) are at the beck and call of none other than Revolver Ocelot, who seems to have become possessed by the ghost of Solid Snake's doppelganger, Liquid Snake, and is now plotting to unleash his insurrection and Take Over the World. Solid Snake, whose body is now aging rapidly for unknown reasons, is brought out of self-imposed retirement for one last mission. Snake considers it a 'hired hit.' Otacon considers it their duty. Together, they have one final chance to kill "Liquid Ocelot".

Tropes used in Metal Gear Solid 4: Guns of the Patriots include: