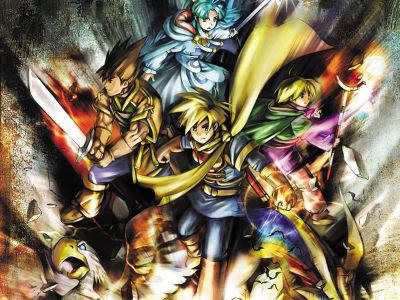 Golden Sun tells the story of Isaac, a teenager from the village of Vale, gifted with the power of Psynergy, and his journey to stop a dangerous group of antagonists from releasing the ancient power of Alchemy and to rescue his friend Jenna. The resulting journey takes him and three companions through many lands and cultures to the Elemental Lighthouses, the seals preventing Alchemy's release.

The sequel/second half changes the viewpoint to that of Felix, one of the enemies from the first game, and has you trying to release the same power you wanted to keep sealed in the first game, for equally good reasons.

Golden Sun: Dark Dawn takes place thirty years later and stars the children of the characters from the original game, who are collectively called the Warriors of Vale.

The English script has given the games a reputation for poor characterization and excess wordiness. While the Japanese script is not entirely without fault for these issues, the English translation holds a lot of the blame for this. There is often failures to make the most basic effort at keeping characterization from being lost when moving from Japanese's distinct individual speech patterns, sometimes even changing lines to contradict established personalities massively to act funny, padding several lines of dialog to hide Parrot Exposition (with mixed at best results), droping several references to real world locations[1], excises some, very slightly, dark bits important for characterization, and the silent main character is given a word of dialog. It also has a much higher reading level than the original script, which doesn't help with the wordiness issue.[2] While far from the total gibberish the plagued many earlier Nintendo games, Golden Sun's English translation has its share of flaws.

The game's battle system revolves around the presence of Djinn, a creative but blatant attempt to cash in on the popularity of Pokémon with a dash of Final Fantasy VIII's Guardian Forces thrown in for good measure. There are a number of Djinn scattered throughout the gameworld (28 in the first game alone), and you Gotta Catch Em All. Once you have them, you equip them to your characters, which alters their Character Class depending on how many Djinn of which element you gave them. Of course, in battle you can also deploy your Djinn for burst damage, Status Buffs, etc, and if you had enough unattached Djinn floating around, you could then use Summon Magic for extra beat-down (just go with it). ...Of course, deploying Djinn removed them from your character, reducing their stats and even changing their class mid-battle, so there was a trade-off involved.

There is a character sheet, which all are invited to add to help out in.

Tropes used in Golden Sun include:
Retrieved from "https://allthetropes.org/w/index.php?title=Golden_Sun&oldid=1730233"
Categories:
Cookies help us deliver our services. By using our services, you agree to our use of cookies.