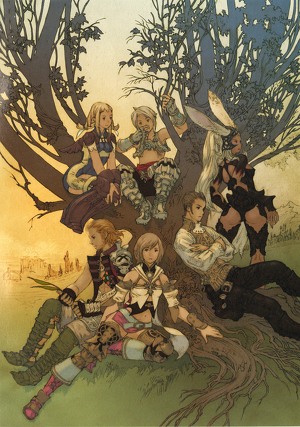 The main party and "some girl dragged into it as well."

Final Fantasy XII is the tale of Vaan, a Kid Hero thief with intentions of becoming a Sky Pirate. ... Actually, no, that's a lie. Although Vaan acts as the story's protagonist, Final Fantasy XII is actually about Ashelia B'nargin Dalmasca (Ashe for short), the young but very mature princess-in-hiding of the Arabian-esque Kingdom of Dalmasca, widow to Prince Rasler and leader of the budding resistance against the Archadian Empire.

It's also about army captain Basch fon Ronsenberg, who was jailed by the Archadians for killing Ashe's father—supposedly. Vaan has an axe to grind with Basch, who was witnessed killing Vaan's older brother Reks. There's also Loveable Rogue Balthier and his rather frosty, Stripperiffic pilot Fran (who has rabbit ears—she's a Viera) who, for their part, really don't seem to care that much—they're only interested in the various things they can plunder when the adventureres inevitably go find some ancient ruins. They aren't disappointed. Of course, they both have their reasons for staying far away from their homes—and Balthier's reasons have more to do with Ashelia's political goals than he's willing to admit.

And Vaan's foster sister and love interest Penelo? She's just along for the ride. In fact, so is Vaan. But they get along well with Larsa Ferrinas Solidor, the 12-year-old political genius prince, who is the ward of Judge Magister Gabranth. Gabranth, in turn, is working for Larsa's only remaining brother Vayne, heir to the Archadian Empire and the game's closest equivalent to a Big Bad. And Vayne employs a sinister doctor named Cidolfas Demen Bunansa—Cid for short, of course—who seems to talk to shadows...

Final Fantasy XII is a complicated and detailed game noticeably different in storyline from other Final Fantasy games; whilst other games focus on individual characters, XII is less about people and more a story of Nations and nationalism, and the lengths some will go to gain power and control destiny. That's not to say it isn't a character study, with Judge Gabranth's clouded conscience and dark history being one of the major subplots - and hence why he's on the boxart. It's full of intrigue and interweaving stories, tactical team-based fighting, well-crafted dialogue (as compared to the sometimes embarrassing lines from X), and Limit Breaks (here called Quickenings). It explores the ideas of freedom, revenge, loyalty, peace and the importance of dreams. It's also a Deconstruction of the "Find powerful McGuffin to Save the World" plot that's been around as long as the genre has, taking a much more somber look at the pursuit of what is essentially a Weapon of Mass Destruction and the lengths to which people would go to gain—or regain—its power.

Aside from taking place in the world of Ivalice, the game borrows much of its plot, atmosphere and world from Final Fantasy II, updating the gameplay for a modern audience. It also owes more to Star Wars than any previous Final Fantasy—the character of Gabranth, in particular, is very clearly compared to Anakin Skywalker. The game happily ties in old Final Fantasy adversaries, as well: Gilgamesh makes his requisite cameo, as do several of the main antagonists from the earliest iterations of the series, as optional summoned beasts. (Chaos and his Elementals, Emperor Mateus, Zeromus, and Ex-Death/Exodus.) Still, it's very much a standalone title that can be played without having any previous Square Soft knowledge.

The game is also the first in the series to go into extreme detail on the nature of items and locations. Expect to find tufts of Phoenix Down and strips of rotten flesh instead of just the items, thorough explanations on the topics of evolutionary biology and monster habitats, a comprehensive history of Ivalice and its tribes and races, and incredible amounts of flavor text in every page of the in-game encyclopedia.

For the first time since Final Fantasy II, the player has the option of strategizing around weapon types and character skills almost indefinitely, and to explore the whole world from the very start of the game. The deserts, caves and small settlements around the game's starting town, for example, offer close to ten hours of exploring. And as soon as the characters are able to head south on the map, the player can choose to go north instead, where the entire rest of the continent is ready to be discovered. Although the main storyline's dungeons and boss fights failed to impress the critics, the side quests offer some of the most engaging gameplay in the series' history.

It's also noticeable as having a step up in difficulty compared to previous installments, and demanding more hours of investment from the player. Whereas in previous game you can level up reasonably well by just defeating every enemy you encounter via point A and point B, in XII enemies in one area can be very easy and in the next Nintendo Hard, so the game will force you to level grind just to progress with the plot.

Final Fantasy XII, is one of a few games in the Final Fantasy series to gain a direct sequel (the others being IV, VII, X, & XIII) with Final Fantasy XII: Revenant Wings, a Real Time Strategy title for the Nintendo DS. A manga adaptation of the game was also released.

However, even with the rather complex Gambit system, sometimes your allies do stupid things you can't control. They'll run right into traps even if you use Libra so you can see said traps for instance, though a Gambit to cast Float on them will fix that. If you set a Gambit to have a character Steal from an enemy, they'll keep attempting to Steal even when the enemy has nothing left for them to take--sadly, there is no Gambit for "Steal: Enemy -> Hasn't Been Stolen From Yet", so you need to give the command to Steal (or stop Stealing) manually.
On the other hand, Artificial Brilliance will sometimes kick in with Gambits even if you are a bit sloppy in setting them up. For example, if you set up a Gambit like "Ally:Any -> Blindna", you're giving this character free reign to use Blindna on any ally any time. However, the AI is smart enough to not cast Blindna on an ally unless they're afflicted with Blind, since otherwise Blindna does nothing. This applies to all status and buffing spells, the AI won't use them even if the conditions are fulfilled unless the spell will actually do something to the target. If you set a Gambit on two party members like "Ally:KO'd -> Raise", only one of them will cast Raise on a dead ally, the other will continue fighting rather than wasting their turn.
In a more extreme case of Artificial Brilliance, setting up a Gambit to Enemy:Weak->Fire (and the like) will have that character cast fire-elemental spells only against enemies who are weak to it, even when the player is unable to detect an enemy's weaknesses using Libra.

The manga adaptation provides examples of

Retrieved from "https://allthetropes.org/w/index.php?title=Final_Fantasy_XII&oldid=1871649"
Categories:
Cookies help us deliver our services. By using our services, you agree to our use of cookies.