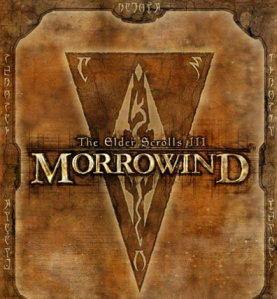 The Elder Scrolls III: Morrowind is the fifth videogame in The Elder Scrolls series by Bethesda Softworks, released in 2002. Like the other games in the "core" series (i.e. the ones with numbers in their names), it is a massive, free-form RPG.

This was the first Elder Scrolls game to be released on a console (the Xbox and, later, the Xbox 360) as well as for the PC. As such, it also marked a major shift in gameplay and design philosophy. Gone were Arena and Daggerfall's nigh-infinite, procedurally generated worlds, replaced with carefully hand-crafted environments that, while smaller than their predecessors, were designed to invoke awe and still be far larger than most video games.

Also, the combat system is radically different from the rest of the series, being closer to more traditional RPGs. It is still real-time, but character stats play a far larger role than player skill compared to the rest of the series. This is generally seen as a downgrade (let's face it, non-magical fights are downright boring, and enemies burn through their spells very quickly), perhaps due to Bethesda's inexperience with designing console games.

However, this does not stop Morrowind from being a classic that a large fanbase still plays to this day. Morrowind marked the point where Tamriel ceased to be a standard Medieval European Fantasy setting and became a truly unique Constructed World with highly memorable cultures, history, creatures, landscapes, mythopoea and characters. Gushing fans will tell you that yes, Morrowind imitates the works of J.R.R. Tolkien, but in a much different way than most fantasy worlds do... by putting the same amount of thought and detail into its universe, rather than just borrowing ideas from The Lord of the Rings.

Also, it puts a huge emphasis on the numerous side quests, to the degree where they are pretty much the most important aspect of the game, and are neatly tied into the main story.

The plot is set some years after the events of Daggerfall, on the far eastern frontier of the Tamrielic Empire. The player character is a convict and an orphan in the Imperial City Dungeons. For unknown reasons, The Emperor Uriel Septim VII personally orders that you be released early on the condition that you be shipped to the backwater province of Morrowind (more specifically, the even more backwater district of Vvardenfell) and meet with an agent of his named Caius Cosades. However, upon being released, you are perfectly free to say "screw that" and explore Vvardenfell at your own pace. If you choose to accept the mission given to you, however, you are launched into a labyrinthine plot involving an Ancient Conspiracy, prophecies, lost prophecies, false prophecies, reincarnation, gods, backroom politics, gang wars, The Corruption and lots and lots of walking. Seriously, you spend a good half of the game just walking around. Not that it isn't worth it.

Two expansion packs were later released for PC: Tribunal has you visit Morrowind Province's capital city of Mournhold to investigate an assassination plot against you. It's a fair bit more challenging than the original game, and intended for mid-to-high level characters. Unfortunately, it is not a Wide Open Sandbox like the rest of the game, as you are restricted to only one part of the stated-to-be massive city and the sewers/ruins beneath it. The new antagonist also turns out to have set up the crappiest excuse for an Evil Plan ever.

The second expansion Bloodmoon is generally considered far better. Set in a frozen tundra with a refreshingly different atmosphere than the main game, it returns to the Wide Open Sandbox formula. There are effectively two main quests to follow in Bloodmoon. The first begins when the player signs on to help an Imperial Legion captain with some odd jobs around his fort, which expands into a simple-but-dramatic plot about rescuing him from the Most Dangerous Game... by taking part in it yourself. Also, werewolves are involved. The second involves helping the new Imperial mining colony of Raven Rock grow from absolutely nothing into a flourishing frontier settlement, with plenty of somewhat interesting moral dilemmas along the way.

Tropes used in The Elder Scrolls III: Morrowind include:
Retrieved from "https://allthetropes.org/w/index.php?title=The_Elder_Scrolls_III:_Morrowind&oldid=1965537"
Categories:
Cookies help us deliver our services. By using our services, you agree to our use of cookies.