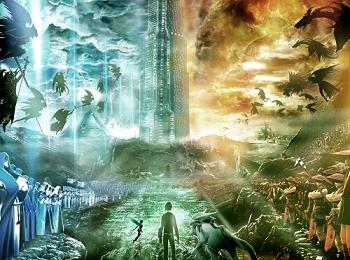 Translated as True Goddess Reincarnation (and also known as simply MegaTen), the three-decade-old Shin Megami Tensei series by Atlus is one of the oldest JRPG franchises around today, and in Japan, its popularity and fame is right up there with Dragon Quest and Final Fantasy. It remained unreleased in the West until Jack Bros for the Virtual Boy. The first major title released in the US was the first Persona game (and the first major game to come out in a recognizable form being the second half of Persona 2); the series did not achieve real Western popularity until Persona 3, however.

Originally based on a novel series called Digital Devil Story, the games tend to involve the use of computers (or similar cyberpunk elements) to summon and control demons that are plucked from practically every mythology on the planet. Post-apocalyptic ruins, engaging and heartbreaking storylines and far-out monster designs are cornerstones of the series.

The main character is usually unable to use magic. To make up for this, he has the ability to talk to demons and recruit them into his own party. The games usually have only a couple human characters in your party, so amassing a small army of demons who can use magic is essential for progress. These demons either don't earn experience points or earn them at an incredibly slow rate, so to create stronger demons in a practical timeframe, you have to fuse two or more of your demon allies together, creating a brand new demon.

A huge part of the series is the emphasis on following your own beliefs: "You are the only one who knows what is right." The games generally involve factions based on the alignments of Law and Chaos battling it out for supremacy, and the game gives you complete freedom in deciding which side is "right". If neither side takes your fancy, you can even kick both their butts and declare yourself as supreme ruler. The Law factions usually include the Christian worldview with a heavy dose of Knight Templar and God Is Evil, while the Chaos side views itself as The Unfettered and Social Darwinist. Neutrality would seem a safe bet, being the "island of stability" where humans thrive, except for one or two teensy flaws we happen to be lugging around.

The games also tend to be Nintendo Hard. Elemental affinities, buffing and debuffing are much more important here than in regular JRPGs: they can make or break battles. Shin Megami Tensei III: Nocturne introduced the Press Turn battle system to the series, where hitting an enemy's elemental weakness would reward you with more actions while hitting their elemental strengths would cost you actions. In an aversion of Useless Useful Spell, buffing, instant death and ailment attacks are both effective and encouraged. Press Turn would go on to be adopted in various forms in the Shin Megami Tensei games that followed, such as the "One More!" system in Persona 3 and Persona 4.

The Shin Megami Tensei series has multiple Spin-Offs: the Persona series, the Devil Summoner series and Digital Devil Saga are the best-known in the US. Others include Majin Tensei, Last Bible, and Devil Children/Demi Kids. It also has an MMORPG called Shin Megami Tensei: IMAGINE. Despite being spinoffs, many include references to other Megaten games or feature character cameos. The games have been released outside Japan under the Shin Megami Tensei label since Shin Megami Tensei III: Nocturne, while in Japan, only a handful of the games bear that name; the rest are unofficially known as MegaTen titles.

A very extensive article about the games in the series can be found here. There's also a comprehensive database of all the games in French here.

The following tropes are common to many or all entries in the Shin Megami Tensei franchise.
For tropes specific to individual installments, visit their respective work pages.

Good night. Take care not to let any demons possess your body while you sleep...

Retrieved from "https://allthetropes.org/w/index.php?title=Shin_Megami_Tensei&oldid=1964833"
Categories:
Cookies help us deliver our services. By using our services, you agree to our use of cookies.