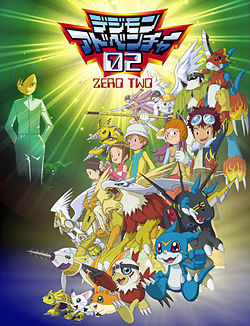 Stand up! A hero is within me.

The second Digimon anime series, and the only direct sequel to another series, Digimon Adventure 02 is set three years[1] after Digimon Adventure. As a point of clarification, the "02" in the title refers to the series being set in 2002, not to its status as a sequel (though yeah, it's obviously that).

The original Digidestined have moved on and grown up after saving the Digital World, and T.K. Takaishi (Takeru), the former cute helpless kid of the group turned confident Lancer, has transferred to a new school which fellow former Chosen Kari Kamiya (Hikari Yagami) attends. They meet brash goggle boy Davis Motomiya (Daisuke), girly tech geek Yolei Inoue (Miyako), and stoic Cody Hida (Iori). A distress call from Agumon draws Tai, T.K. and Kari back into the Digital World, taking Davis with them; there, they find that the Digital World is under siege from the Digimon Emperor (Digimon Kaiser), a human child who controls Digimon, blocks evolution, and aspires to conquer the Digital World. With new, stronger Mons, a few new tweaks to the evolution system, and an enemy their own age from their own world, these five have to work on their own few experiences with Digimon and work through having been sheltered at that time as children.

Its Distant Finale epilogue is infamous as the subject of much fandom ire, partially for much of what became of the Chosen not particularly fitting their in-series characterization, and partly because Sora married Matt and not Tai. Even so, it was still fairly popular, continuing the phenomenon set by Digimon Adventure. It was succeeded by Digimon Tamers.

It was accompanied by a pair of Short Anime Movies, neither of which are canon. Hurricane Touchdown, also known as Transcendent Evolution! The Golden Digimentals, is set before Ken joins the Chosen, and details their adventures in America and dealings with Wallace, a Chosen with twin Digimon; it was dubbed as the third part of Digimon: The Movie, and suffered for it. The second film, Diablomon Strikes Back, is set within a year of the finale and is about the Chosen's response to the resurrection of Diablomon, the antagonist of Our War Game who came dangerously close to defeating them last time; it aired in the US as a television special in the lead-up to the start of Digimon Savers.

Official releases of the Japanese version with English subs (of questionable quality) of Digimon Adventure 02 are available from Hulu, Crunchyroll, and Animax, but only to residents of the United States.

Tropes used in Digimon Adventure 02 include:
Retrieved from "https://allthetropes.org/w/index.php?title=Digimon_Adventure_02&oldid=1648687"
Categories:
Cookies help us deliver our services. By using our services, you agree to our use of cookies.