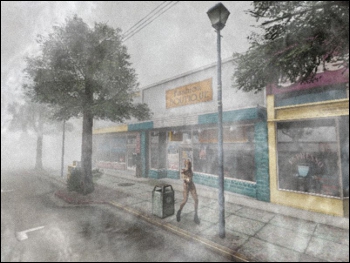 Enjoy your stay. Or die trying.

Silent Hill is a Konami video game franchise in the survival horror genre consisting of the following:

And a handful of para-game material such as artbooks, comic books, and a "making of" DVD.

The titular setting is an American lakeside resort town with a long history. American Indians called the area the "land of the spirits," and may have considered it cursed. The history of Silent Hill is rife with disappearances, murders, and mysterious activity, mostly owing to the existence of an unnamed demon-worshiping cult.

The Silent Hill games have largely dealt with the repercussions of that cult's actions, including the existence of multiple "layers" of the town itself. The normal town is an average American tourist attraction. On another level, it is long-abandoned and empty, save for the lost and damned who stumble onto its streets. On deeper levels, it is a crumbling ruin, or the full-fledged Otherworld: a burning, rusty Hell.

A new entry in the series was announced for Sony's recently revealed Playstation Vita called Silent Hill: Book of Memories, which is a multiplayer hack and slash game starring player-created characters.

Along with Resident Evil, it is considered one of the defining examples of the Survival Horror genre, and is famous for the high quality of its story and background music.

The following tropes are common to many or all entries in the Silent Hill franchise.
For tropes specific to individual installments, visit their respective work pages.
Retrieved from "https://allthetropes.org/w/index.php?title=Silent_Hill&oldid=1881837"
Categories:
Cookies help us deliver our services. By using our services, you agree to our use of cookies.