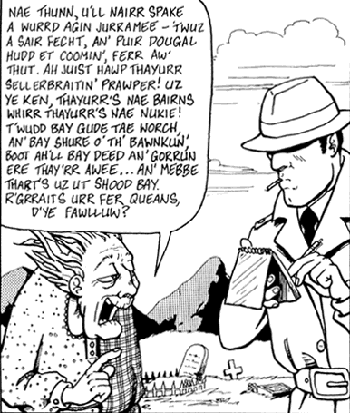 A Funetik Aksent (Phonetic Accent) is dialogue spelled phonetically, so that it looks the way the character sounds to someone with another accent.

Accents are one of the major ways of providing characterization. This creates a challenge for writers, since it's not just a matter of word choice and grammar. The same word can be pronounced very differently in different regional accents, let alone ethnic and foreign accents. Authors can get past that limitation with a phonetically spelled accent, formally called an "eye dialect" in the study of linguistics (because it looks how it sounds, a term coined by linguist George P. Krapp in his 1926 book The Psychology of Dialect Writing) or alternately a "pronunciation respelling".

However, a Funetik Aksent has a large number of downsides. Non-standard spellings will slow readers down, especially if English is not their native language, since they're likely more adept at reading standard written English than at deciphering an unfamiliar accent; moreover, to do a Funetik Aksent well requires a keen ear for how people talk in the real world, and painstaking attention to detail to ensure that the accent is represented consistently throughout the text. Most importantly, though, it assumes that there is a single "correct" way to speak English, which is certainly not true. (There is no equivalent of the Academie Francaise for the Anglophone world.)

The Funetik Aksent is often used to imply that the accented characters are less educated, less intelligent, or less literate than the reader or the protagonist. A classic example of this is Gone with the Wind, where the black slaves' and poor whites' accents are given phonetically, but the white owners' accent (which is every bit as thick) isn't. The implication is that the slave owners' language is proper English, while the slaves and poor whites just aren't smart enough to speak properly.

Also, since standard English is not spelled phonetically, a Funetik Aksent can be used to give the impression of an uneducated speaker even when the pronunciation is perfectly standard (as with the name of this trope). The latter use has given the term "eye dialect" a negative connotation for some.

Conversely, some readers will read such implications into texts written in a form of Funetik Aksent regardless of whether the author actually intended them or not. In such cases, expect loaded words like "stereotypical", "clichéd", "music-hall dialect", etc. to be bandied about. One can say that a wide-spread double standard about accents and dialects hold true here too: If they're not a native speaker of the accent and dialect in question, no matter how good writers or performers are at reproducing it, they will be accused of getting it wrong or caricaturing and making fun of the speakers of said dialect. This is not the case with people using Funetik Aksent spellings to write in their native dialect, even if it is as hard to read. With writing in dialect, Funetik Aksent spelling can be pretty much unavoidable, as for most dialects, especially regional and local ones, there exists no standard spelling.

This trope exists in Japanese language manga as well. Thick accents will probably rendered phonetically in one of the Japanese syllabaries or "kana" (most of the time, in katakana) instead of the standard "mixed script" with is made up by using Kanji (ideographic characters and Kana. Native accents may be spelled in standard scripts and bear "furigana" (small kana over kanji) in phonetic spelling. Foreign accents will be rendered with lot of katakana and only few kanji, to give a sense of illiteracy.

Interestingly, some instances of Funetik Aksent have preserved accents that became extinct before the invention of sound recording. A well-known example is the character of Sam Weller in Dickens's The Pickwick Papers; Weller's "Cockney" accent is nothing like a 20th century Cockney accent, but without Dickens, nobody would have known.

Littering the text with apostrophes is optional. See also Speech Bubbles, for alternative ways of conveying information about the characters' voices, and Psmith Psyndrome, in which characters insist that someone else is using the wrong Funetik Aksent. And to read this article in a Funetik Aksent itself, see here, exactly as that poor sod was trying to do a few minutes ago, and now I'm off to the bar...

To some more phonetic-savvy people, the accent might not be phonetic at all. "Funetik", using default phonetic rules, would be pronounced "few-nitt-ick".

Retrieved from "https://allthetropes.org/w/index.php?title=Funetik_Aksent&oldid=1955456"
Categories:
Cookies help us deliver our services. By using our services, you agree to our use of cookies.