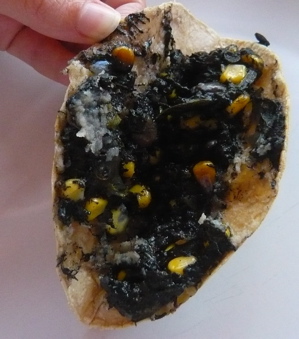 The planet Earth is a very diverse place, with many different cultures, each of which has its own traditions, history, worldview, and menu. For the hapless traveler, encountering a new and very different food can be an unsettling experience of the Squick-tastic variety. This is very much Truth in Television, and often finds its way into fiction as well, where it is usually played for laughs. Plus, it's an easy challenge for a Reality Show to pull off. (For example, pictured here is huitlacoche, corn grains infected with corn smut, a true Mexican delicacy!)

For the outer space version, see Alien Lunch. Foods like this may taste like feet. Contrast with I Ate What?, when a person ingests something that's not food in any culture. Note that most Foreign Queasine is automatically Stock Yuck material. May appear as a Masochist's Meal.

No real life examples, please; what is foreign and bizarre to one person is local and mundane to another, and the user base of All The Tropes is not situated in one particular country. Also, taste is subjective.

Examples of Foreign Queasine include:

It's a cookbook! IT'S A COOKBOOK!!

Retrieved from "https://allthetropes.org/w/index.php?title=Foreign_Queasine&oldid=1933509"
Categories:
Cookies help us deliver our services. By using our services, you agree to our use of cookies.