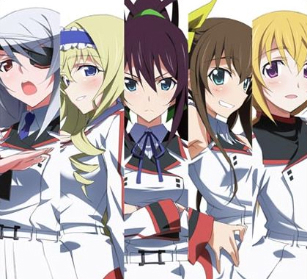 The Tall, Dark and Bishoujo, The Ojou, the Childhood Friend, the Chinese Girl, and the French Girl. Place your bets.

A Subtrope of the Harem Anime genre, a Romantic Comedy with one male protagonist, and a bunch of girls who are all in love with him, and equally close to him. The plot intentionally tries to balance out the relationship, with equal amounts of screen time, fanservice, and plot relevance for the girls.

In these stories, the bigger emphasis is usually on the "comedy" part of Romantic Comedy, if there is any relationship building, it will happen with all the girls one after another, or it will be reverted by the end of the episode.

This plot type is common in Light Novel series and their adaptations, probably because of the low production costs, and the lack of hostile market competition, that allows writers to lengthen a plot for dozens of volumes.

Contrast with Supporting Harem, where one of the girls was always "in the lead".

Examples of Balanced Harem include: