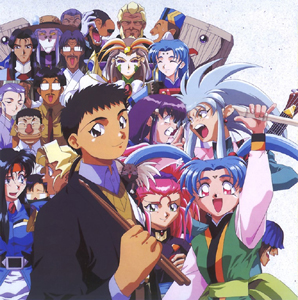 The OVA series Tenchi Muyo! Ryo-Ohki (simply Tenchi Muyo! in the United States) follows the life of Tenchi Masaki, the grandson of a Shinto priest who has been teaching him an ancient form of swordplay. When Tenchi steals the keys to -- and intrudes upon -- a sealed cave on the shrine grounds that is reputed to hold a sleeping demon, he accidentally releases Ryoko, a Space Pirate who has been kept in suspended animation there for seven centuries. This act begins a cascade of events that results in Tenchi moving from Kurashiki to the Okayama countryside, acquiring a half-dozen alien girls in an Unwanted Harem, discovering his own secret heritage, and becoming involved in events of literally cosmic proportions.

Tenchi Muyo! is a classic "harem" anime of the 90's during the second Anime wave; the franchise is an action/comedy science-fiction story that started in 1992 as a six-episode OVA series. The OVA proved so popular that an additional seven episodes were quickly added, although these ended the OVA's story on something of a Cliff Hanger.

Viewers did not lack for Tenchi material in the decade-plus between OVAs, however. In addition to the OVA, Tenchi Muyo! spawned:

A third OVA series, which continued the original OVA's plot -- and unveiled a lot of new surprises in the process -- was produced in 2004. It is available in the United States (as Tenchi Muyo! Ryo-Oh-Ki) thanks to Funimation, who managed to reunite most of the original North American dub cast from Tenchi in Tokyo on.

Throughout the majority of the franchise, the story revolves around the same basic core cast:

The characters and the exact relationships between them may vary from show to show (in the OVAs, Washu is Ryoko's mother; in the TV shows, she's a simply a partner in crime; in Pretty Sammy, she's her high school teacher), but one thing never changes -- Tenchi is always getting chased by far more girls than he can handle.

Tenchi Muyo! is the Trope Namer for:
Tropes used in Tenchi Muyo! include:
Retrieved from "https://allthetropes.org/w/index.php?title=Tenchi_Muyo!&oldid=1962294"
Categories:
Cookies help us deliver our services. By using our services, you agree to our use of cookies.