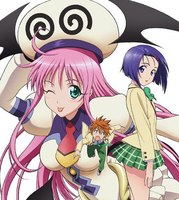 Rito Yuuki is a hapless high school teenager who's hopelessly in love with the shy, gentle Haruna Sairenji, but just can't work up the nerve to confess his feelings. One night while taking a bath, however, a gorgeous (and naked!) alien princess named Lala Satalin Deviluke crash-lands into his bathtub, and things just spiral out of control from there...

Written by Hasemi Saki and illustrated by Kentarou Yabuki of Black Cat fame, To LOVE-Ru is -- well -- you probably haven't seen Fan Service until you've seen or read at least a minimal amount of this series. The manga debuted in April 2006, while an Animated Adaptation premiered two years later and ran for 26 episodes. Six OVAs have been released, and a second TV series, Motto To LOVE-Ru, began airing in June 2010 (amazingly, the new series manages to crank up the fanservice even further, if such a thing can be believed).

Unfortunately, due to Yabuki's messy divorce and subsequent gain of custody of his three year-old daughter (see Creator Breakdown below), the manga was officially and very abruptly canceled in the Japanese Shounen Jump magazine. He has since gotten better, and did an eight-month stint illustrating another manga series (which has cameo appearances from To-Love-Ru characters and takes place in the same city).

A Spin-Off/sequel manga titled To LOVE-Ru Darkness, launched in October 2010, brings back both the author and artist. It is centered around Momo's plan to share Rito with the others whose happiness depends on him, and an unknown antagonist who controls several assasins similar to Yami, as well as Yami's Dark and Troubled Past. While characters of the original manga return, Darkness promotes both Yami and Momo to main characters and significantly downplays the original protagonists. The fanservice in Darkness has been amped Up to Eleven, to the point where Rito has "Accidental Pervert'ed" his way through at least five heavy make-out sessions with entirely different women.

Note that "To LOVE-Ru" is a multilingual Pun on the word "trouble;" in Japanese, these are pronounced identically (toraburu).

Tropes used in To LOVE-Ru include: