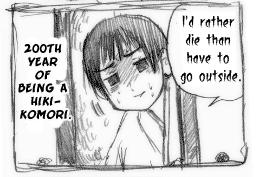 Japan, taking the art of being a hikikomori to the extreme.

A psychological cultural disease, mainly present in Japanese culture, where a young person snaps under pressure and becomes socially and physically withdrawn into their household, often for years. Because of the social stigma and the assumption that the person's family are the right people to handle the situation, how many cases actually exist is uncertain.

Because many hikkis vaguely cope by assuming an obsessive activity, many people assume they make up a sizable amount of the Otaku community, which unfortunately is related to the moral panic that otaku are psychopaths. This came to a head in the late 1990s via several high-profile bizarre crimes, although some psychologists argued that hikkis are, by definition, not confident enough to actually hurt others, and are rather just pitiable unhealthy folk.

While the hikikomori phenomenon is similar to shut-in behaviour in other countries, the Japanese culture enables its extremes. A Western mother could tell her adult son to grow up and get a life; not so for a Japanese mother. Where a family in another culture would be likely to get a developing shut-in to see a doctor, a Japanese family is unlikely to, because having a family member visit a psychiatrist or have therapy would be shameful. Not only that, but having a hikikomori in the family is shameful. The strong tradition of taking care of family members makes a Japanese mother wash a shut in's clothes or at least bring food at his room door, enabling the most extreme forms of shutting in. Furthermore, in Japan just the action of applying for welfare is inherently shameful. For those that have no family at hand to provide them, every city has little 24/7 shops where they can do their shopping when there are as few people as possible on the streets. Better yet, the abundance of vending machines makes it possible to buy snacks and drinks without ever seeing a human face.

Some anime as a rule seems reluctant to reference it except as an implied trait of otaku lest it offend the audience, and most 'mainstream' non-otaku series have a decidedly negative portrayal. For this condition played for laughs (as it often is in Western media), see Basement Dweller. When the hikki in question is a famous poet, writer, painter, or whatever, see Reclusive Artist. Unless the Hikikomori can find a source of income which doesn't require he leave his fortress of solitude, then he's probably also a NEET.

Compare The Hermit. There's a good argument that Hikikomori are the Post Modern equivalent of The Hermit, rejecting the modern culture of consumerism and competition, while retaining a tentative connection to the world via the Internet. Hikikomori take a deconstructive take on Japanese Mythology, identifying themselves with the Amaterasu who hid in the cave, rather than the Amaterasu as the rising sun and national symbol.

Examples of Hikikomori include:

Retrieved from "https://allthetropes.org/w/index.php?title=Hikikomori&oldid=1938931"
Categories:
Cookies help us deliver our services. By using our services, you agree to our use of cookies.