Everything About Fiction You Never Wanted to Know.
(Redirected from High School DxD)
Jump to navigation Jump to search 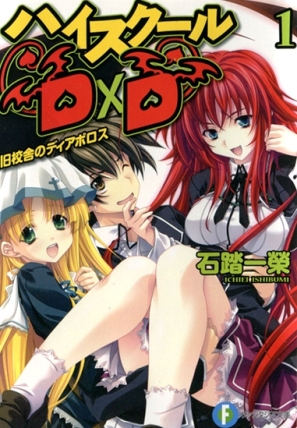 "Are you serious! I'm able to make my own harem? I could have sex with them as well right?"
"Yes. I think it's fine if it’s with your servants."
I felt a shock going through my body. Absurd! Something like that is actually possible? In the real world and also as a human, it is really hard to build your own harem. If I was still an ordinary human, no matter what I'd do, I won't be able to get a batch of girls since right now I'm in a bad position.
I don't even have a single girlfriend. Well I did, but I was killed by my ex. But now! Now I can...!
"Oooohhhh yeaaah!! Being a devil rocks! Hell yeah! I can't calm myself anymore! I probably can throw away my porn!" He never throws it though.

Remember your first date and how much it sucked, what with nervousness, lack of ideas as to what to do, and running late when you thought you came in early? Well, Issei Hyoudou has you beat. Okay, his first date started out well enough—in fact, 99% of it was awesome. It's just that the other 1% involved his girlfriend stabbing him in the stomach and leaving him to bleed to death.

The next day he wakes up naked, right next to an equally naked Rias, who then tells him that she has saved him by turning him into a demon, and is now under her employ. With a promise of power, glory and his very own harem, Issei doesn't mind the tradeoff and quickly jumps onto the prospect. To this end he joins the Occult Club, consisting of himself, Rias, Akeno and Koneko, as well as Asia Argento, a girl raised in a church, and Yuuto Kiba, the school's charismatic prettyboy.

An ongoing 2008 Light Novel series by Ichiei Ishibumi and illustrated by Miyama-Zero, High School DxD is a series that runs away with all the gratuitous Fan Service and one boy's slow ascent up the ranks of the demon world. It also has an ongoing 2011 manga series illustrated by Hiroji Mishima and a Winter 2012 Anime adaptation.

Baka-Tsuki has a translation project for the Light Novels.

FUNimation also has licensed the anime. You can watch it here at Funimation or here at Nico Douga. They're censored though.

The series is decidedly not about high-schoolers playing Dungeons & Dragons.

Tropes used in Highschool DxD include: