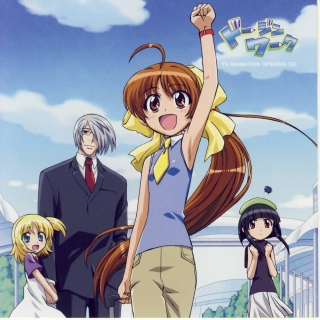 She soon finds out that it is a very competitive world and that selling her material won't be so easy after all--especially since it's not really that good. Still, she is not deterred by her lack of sales and decides to persist, meeting some very interesting and helpful people along the way and finding her true goal in life.

The anime series, which aired in 2007, consists of 12 short episodes and is based on a Yonkoma manga by Hiroyuki, who is also known for his doujinshi of Tsukihime and Fate/stay night-- especially well-known for A Cat Is Fine Too.... It diverges from the manga in that the sexual comedy has been toned down considerably, coupled with a massive de-aging of the main character's appearance. The characters' quirky personalities have been well-preserved though and the anime still retains a lot of the energy and zaniness of the original. Amidst all the general silliness, sexual innuendo and Otaku stereotypes it still manages to tell a heartwarming story of friendship and finding your place in the world.

Tropes used in Doujin Work include:
Retrieved from "https://allthetropes.org/w/index.php?title=Doujin_Work&oldid=1634040"
Categories: