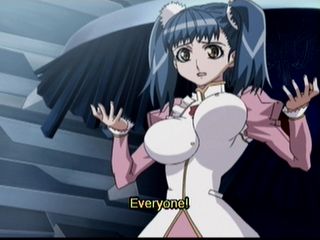 One shall rise, one shall fall... (animated version)

The act of drawing a female character with unusually large and buoyant breasts and without a bra, then animating every individual jiggle, sway, bounce and bobble they undergo. Also known as Gainax Bounce or the Gainax Bounce Effect.

The motion so displayed is typically asynchronous—each breast is animated separately and possesses its own individual movement.

The term was coined by fans some time before 1993 and makes reference to the anime production company Studio Gainax, many of whose earlier releases made use of this particular variety of Fan Service. According to a Usenet post from 1993, one particular busty young woman from the Gainax anime Otaku no Video inspired a tongue-in-cheek unit of measurement for Gainaxing one full bounce is apparently equal to one "Misty May".

When a male does it, it's a Pec Flex.

Retrieved from "https://allthetropes.org/w/index.php?title=Gainaxing&oldid=1945798"
Categories:
Cookies help us deliver our services. By using our services, you agree to our use of cookies.