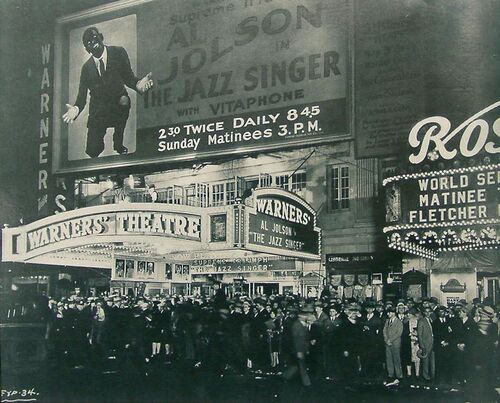 The start of the Golden Age, also known as the "studio era," is generally held to be the year 1927, with the release of The Jazz Singer, the first motion picture to have synchronized sound. Or so its reputation says—in reality, only a few minutes of the movie had synchronized vocals, with most of the rest being a silent film. It was no matter, though. Advances in technology combined with the success of The Jazz Singer meant that, by 1930, "talkies" had completely overtaken silent films.

This had several major effects on the entertainment industry. First, Vaudeville became Deader Than Disco virtually overnight, unable to compete with the now sound-enabled motion pictures. Many former vaudeville actors wound up migrating to film in order to find work. Second, many screen actors saw their careers ruined by the rise of sound in films. Some had bad voices or thick accents, others had trouble remembering their lines—in any event, a fair number of silent film's biggest stars couldn't hack it in the motion picture industry anymore, and wound up getting replaced by the aforementioned vaudeville stars as well as Radio actors. Along with them went thousands of piano players as well, who were hired to play the BGM for silent movies. Third, smaller studios that didn't have the money to switch to sound found themselves getting left behind and going bankrupt, solidifying the power of the "Big Eight" Hollywood studios. Finally, Hollywood was able to cash in on the novelty of sound to not only dodge the effects of The Great Depression, but provide a nation with escapist entertainment in a time when they needed it most.

In 1929, the motion picture industry got its own award ceremony, The Academy Awards. In the first ceremony (which was basically a dinner party with a small award ceremony tacked on) which was for films made in 1927 and 1928 (it would be two years eg. 1928-29, for a few more ceremonies to come), Best Picture went to two different films: The World War I romantic drama Wings and the dreamy arthouse romance film Sunrise: A Song of Two Humans. Whereas most encyclopedic sources list Wings as the sole winner, Sunrise is better known today due to its critical acclaim and for being the Ur Example, Trope Maker or Trope Codifier of many camera and special effects techniques we take advantage of today (like, for instance, now-common stuff like tracking shots). This first Academy Awards is often considered to be the last major hurrah for silent films before talkies took over almost completely.

Hollywood's success during the Golden Age was built upon the "studio system," which began during the Silent Age but truly took off during this time. The studio system was a model of vertical integration—the "Big Five" studios (MGM, Paramount, Warner Bros., RKO and Fox) all had controlling stakes in their own theater chains, ensuring that their films would get distributed. (The "Little Three" -- Universal, Columbia Pictures and United Artists—would never own more than small theater circuits, and relied on independent theaters to carry their movies.) There were a number of situations where one studio would control all of the theaters in a town or city—perhaps the most Egregious instance of this was when Paramount owned every theater in Detroit, enjoying a monopoly on film distribution in one of America's largest cities.

A key part of the studio system was a practice known as "block booking," in which they would sell a year's worth of films to the theaters as a unit. Blocks would include a number of particularly attractive, big-budget films, which would be used to entice theaters to buy the whole block, as well as a mix of lower-budgeted B movies of varying quality. If you think that this would allow the studios to slack off with the quality of their movies, knowing that the theater would be required to show them anyway, then congratulations—you're thinking like a Golden Age Hollywood executive! Block booking was all too often used by the studios to cover for releases of mediocre quality—although many classic movies were made during this era (the theaters needed good reasons to buy the blocks in the first place), one needs only to flip to TCM on a Tuesday morning to realize that Sturgeon's Law applied during the Golden Age just as much as it does today. Theater anger at the practice of block booking first began to boil in 1938, following the blockbuster success of Disney's Snow White and The Seven Dwarfs, an animated film that was not made by the major studios and did not employ their stars.

Early on, this era had a wealth of content variety for the cinema goer far beyond the feature film, with newsreels and short subjects like film serials, animation (much of early Disney and Warner Bros animation was composed of shorts), musicals, and comedies like Laurel and Hardy and The Three Stooges. Alas, by the 1940s this was gradually replaced by the double feature programming, which helped create the above complaints of the dreck that theater companies had to show thanks to block booking.

Studio control of artists, and censorship

Another cornerstone of Hollywood during this era was the "star system," which was basically the Golden Age version of the Hollywood Hype Machine. Under the star system, actors were effectively employees of the studio that they were working for, and were bound to them in contracts. And by "bound to the studio," we mean "the studio pretty much owned them." The studio would take promising, good-looking young actors and give them brand new public images, sometimes changing their names (Archie Leach became Cary Grant, Lucille LeSueur became Joan Crawford) and even getting them plastic surgery (which is how Margarita Carmen Cansino became Rita Hayworth, and how countless Jewish actors became WASPs) in order to make them more marketable.

Although acting and voice lessons were usually part of the package, the main emphasis was clearly on image and presentability. Stars would have their films chosen for them by the studio, even if the star in question had other ideas of what movies to do. The studio would arrange dates and romances between its male and female stars in order to drum up publicity, especially if one of the stars was secretly gay. Contracts often came with morality clauses to keep stars from engaging in such indiscretions as drug use, alcoholism, divorce and adultery, which (it was feared) would ruin their public images and make them unprofitable. Women had to behave like proper ladies off set, and men had to act like gentlemen. Of course, if they did violate these clauses, the usual response would be to use hush money to silence witnesses, or promise exclusive stories to the tabloids so that they wouldn't report on it. (Any similarities to how present-day Disney manages its teen stars, or how Japan's anime industry manages its seiyuu, are purely coincidental.)

Directors were also contractually bound to their studios. As a result, the way that movies were made came to be standardized, almost like a production line. Standardization was so powerful that each studio developed its own "style," distinct from the rest, with regards to how their movies looked. Executive Meddling was the norm, and headstrong directors like Alfred Hitchcock, Orson Welles and John Ford often fought against the restrictions put on them by the studio. The concept of the "auteur"—a director who controls most aspects of the production—did not exist in Hollywood until well after the Golden Age. This was also the era of the Hays Code, enacted in response to both moral panic over indecency in early film and a perceived number of immoral people within the industry itself (Fatty Arbuckle being the most notable - and he was not guilty of the charges brought against him), as well as the National Legion of Decency, a largely Catholic censor group that could effectively destroy a film's profitability by declaring it "morally objectionable" (basically, imagine the Parents Television Council, but Catholic, movie-focused and far more powerful). This placed extremely strong censorship on films in addition to the demands of the executives. The combination of these two factors meant that Strictly Formula, more often than not, ruled the day when it came to filmmaking.

As one could guess, not everyone in Hollywood was pleased with these restrictive arrangements. Indeed, as early as 1919 (a decade before the official start of the Golden Age), Douglas Fairbanks, Charlie Chaplin, Mary Pickford and D. W. Griffith founded the studio United Artists in order to subvert the studio system and have greater control over their work and their lives. Later, during the '30s, Hollywood's main unions formed to protest the low wages and grueling work schedules experienced by actors, directors and writers. At the time of United Artists' founding, the head of Metro Pictures, Richard A. Rowland, described it as "the inmates taking over the asylum." In time, however, UA's model would come to be the standard for Hollywood, especially once the Golden Age studio system began to fall apart...

Despite the jade-tinted view that this page gives towards the era, the Golden Age of Hollywood wasn't all bad. There is, after all, a reason why it's called the Golden Age—when the system worked, it really worked. The year 1939 in particular has been called Hollywood's "golden year," seeing how it gave us Gone with the Wind, The Wizard of Oz, Stagecoach, Mr. Smith Goes to Washington and many other classics. Fiction set in the Golden Age of Hollywood will nearly inevitably take place in 1939. Other classic films from the Golden Age include Casablanca, It Happened One Night, Mutiny on the Bounty, King Kong, The Maltese Falcon and Citizen Kane, proving that, when push came to shove, Hollywood knew how to get results with its regimented system. And Universal, meanwhile, was pretty much inventing the modern horror genre.

For information about the animated side of the industry during this time, see The Golden Age of Animation.