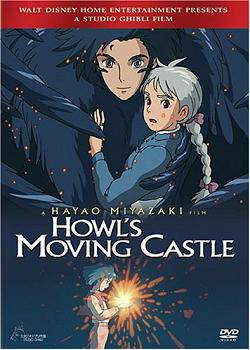 Howl's Moving Castle is a Studio Ghibli film directed by Hayao Miyazaki, very loosely based on the novel by Diana Wynne Jones. Now, instead of a Medieval European Fantasy, the land of Ingary is a Steampunk/Gaslamp Fantasy world filled with both technology and magic.

The story starts in much the same way as the book: Sophie is cursed after offending the (rather petty) Witch of the Waste, and sets out to find a way to break the spell. A scarecrow she calls "Turnip Head" leads her to Howl's Castle after she stands him up, and she makes a deal with Calcifer to break each other's curses under the guise of becoming Howl's cleaning lady. But now, there's a raging war going on in the background, over a missing Prince. Howl's teenage apprentice Michael is now a cute young kid named Markl, and Howl, a rogue wizard, is doing his best to try and halt both sides of the war, but the transformations that he uses in order to fight (into an enormous birdlike figure) are bringing him closer and closer to losing his humanity.

The film focuses on both Sophie and Howl's romance as well as the war plaguing their nation. Unlike the original, which was an Affectionate Parody of fairy tales, the film is a straight-as-the-monster-crow-wizard-flies fairy tale itself.

Tropes used in Howl's Moving Castle (anime) include:
Retrieved from "https://allthetropes.org/w/index.php?title=Howl%27s_Moving_Castle_(anime)&oldid=1739836"
Categories:
Cookies help us deliver our services. By using our services, you agree to our use of cookies.