Our Giants Are Bigger 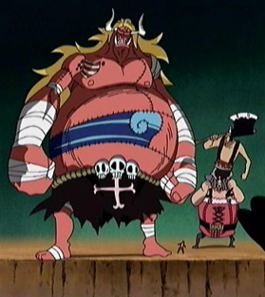 The guys on the right aren't regular-sized humans; the tiny speck on the bottom is.

Human beings, but super-sized, giants have been around since the times of ancient mythology. In various mythologies, gigantic peoples are featured as primeval creatures associated with chaos and the wild, and they are frequently in conflict with the gods, be they Olympian or Norse. These creatures may range in size from around 7 feet (the average size of the tallest Real Life humans), to truly colossal proportions.

The most common perception of the giant is the big, dumb brute who grinds people's bones to make his bread. But literal gentle giants are also featured in both legends and modern stories, who are somewhat friendlier (and sometimes smarter) than the stereotype would imply. The evil types may be antagonists in their own right or serve as Giant Mooks (pun intended) for an Evil Overlord.

In Real Life, the profusion of Giants in mythology is usually attributed to memories of childhood, when adults tower over you, and also the rivalry between young men and old men. Outside of mythology, when explorers have characterized the inhabitants of a newly-discovered land as "giants", it was usually because of a difference of only a few inches in height.

This is Older Than Feudalism. Not to be confused with The Giant, who may be a big wrestler, but isn't nearly that big. See also Smash Mook, Giant Mook, Attack of the 50-Foot Whatever.

Really huge giants, in any real-world context, would fall victim to the Square-Cube Law in short order, but the vast majority of such beings tend to exist in fantasy universes that cheerfully disregard such things as the laws of physics in favor of creating a good story.

Examples of Our Giants Are Bigger include:

Retrieved from "https://allthetropes.org/w/index.php?title=Our_Giants_Are_Bigger&oldid=1860891"
Categories:
Cookies help us deliver our services. By using our services, you agree to our use of cookies.