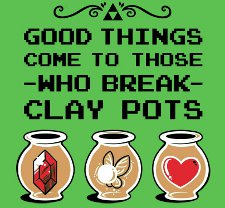 As much as the motto for the FPS is, "If it moves, shoot it," the motto for the Adventure Game and Role-Playing Game is, "When it's dead, loot it." or "Take everything that isn't nailed down or too heavy [1]" (The latter advice appeared in the general strategy section of Infocom's manuals.)

When gaming began, and pretty much every game was Dungeon Crawling, this made sense. The hero was typically at least tangentially a treasure hunter, so looting ancient caverns was part of the job description.

When games started to move into different settings, though, the need to MacGyver up a solution to a puzzle from found items remained, and thus it stayed necessary to pick up everything you could find, especially since absolutely essential items might be Lost Forever unless you grabbed them while you still could. In populated environments, this makes the hero come off as a bit of a kleptomaniac.

Fortunately, hardly anyone ever notices. In fact, as you wander around the world, particularly in RPGs, you will repeatedly just waltz uninvited into every house in the town, smash the breakables and loot it right before the owner's eyes, and be told "There are many guards in the castle."

Any game where theft is the main object (e.g. the aptly named Thief series) or thieving is a major character option will make stealing many things quite challenging, naturally enough, and there will usually be quite a few red herrings in the way of worthless items, booby traps, and so on. There will still probably be some sucker who leaves his door and chest unlocked, though.

Sometimes the logical picks up, and instead of finding loot you find underwear.

Note that this trope refers to the player's behavior of having the irresistible urge to pick up anything that is not glued to the floor. A game might have consequences if the player is caught trying to steal an item, but if that same game allows for some other way for the player to get a hold of that item (sneaking, murdering the owner of the house, pick up everything and escape before the guards show up, etc) just so they can make fat loot to sell, then it is still subject of this trope.

A subtrope is Empty Room Psych.

For items you may obtain in this fashion, see Vendor Trash and It May Help You on Your Quest. Contrast Money for Nothing, Worthless Yellow Rocks.

If you can steal from shops, however, be aware that most shopkeepers' policy is Shoplift and Die...

Examples of Kleptomaniac Heroes include:

Retrieved from "https://allthetropes.org/w/index.php?title=Kleptomaniac_Hero&oldid=1970231"
Categories:
Cookies help us deliver our services. By using our services, you agree to our use of cookies.