It's a Wonderful Failure 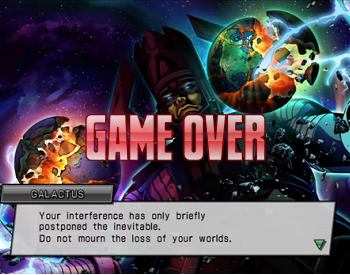 Ladies and gentlemen, the lost ending!

"Death is not a hunter unbeknownst to its prey. One is always aware that it lies in wait. Though life is merely a journey to the grave, it must not be undertaken without hope. Only then will a traveler's story live on, treasured by those who bid him farewell. But alas, my guest's life has now ended, his tale unwritten..."
—Igor, Persona 3

Most game developers are comfortable with just giving players a generic Game Over screen to inform them that they lost. However, some particularly cruel game developers aren't satisfied with just telling them how badly they lost—they have to show that the player failed them through an alternate Downer Ending in which players are forced to endure the terrible fate that awaits the characters they were supposed to be helping. They didn't just get a Game Over where they can reload and everything's fine - they FAILED. They failed and now they will live just long enough to see the Big Bad claim victory and to see the END OF THEIR CIVILIZATION. This has the effect of getting players so upset that they are inclined to Set Right What Once Went Wrong and retry the game.

Tends to be a source of Nightmare Fuel or tears, especially for younger gamers, and thus a very strong incentive to not die. May however be very annoying when the game is hard and requires the player to try and fail over and over.

Sub-Trope of Nonstandard Game Over. Compare Have a Nice Death and Shoot the Shaggy Dog. Not to be confused with Fission Mailed, which is non-sarcastically wonderful. This is for game overs, for just dying see The Many Deaths of You.

This is a death trope. Expect lots of marked and unmarked spoilers ahead.

May or may not be related to It's a Wonderful Plot.

Examples of It's a Wonderful Failure include:

Well, that's where my story ends, because by the stupidest of chances, I happen to run into the cop from the restaurant while he was making his rounds in the park. It was one chance in a million, and I bought the winning ticket. I'll spend the rest of my days rotting in prison.

They find your body and give it new life. As a cyborg you will serve SHODAN well.

With John defeated, Skynet was able to overpower the resistance thus insuring [sic] the extinction of all human life on earth.

Both of these are accompanied by the sound of a heart monitor, quickly going from normal to distressed to flatlining.

Freu: (in Opening stage) Rest in peace, Tia...
Freu: (in her stage) You disappoint me...
Zorne: (Pre-Trau events) It'll end like this no matter how many times you try!
Zorne: (Post-Trau events) ...How could Trau lose to a wuss like this...? That idiot...!
Trau: (Pre-Zorne events) You're much better off forgetting what you can't change.
Trau: (Post-Zorne events) *Huff* *huff* I got too worked up here...
Luste: Yay! I beat Tia!!
Grolla: (Pre-Sichte events) ...Pathetic.
Grolla: (Post-Sichte events) Is that all you've got?
Sichte: (Pre-Grolla events) You shall become a sacrifice for our new world.
Sichte: (Post-Grolla events) Now no one can stand in the way of our dream.
Liebea: Forgive me, Miss Tia...
Schwer: I never want to leave this place...
Raimund: (First phase) I EXPECTED MORE FROM YOU...
Raimund: (Second phase) THAT WAS A MAGNIFICENT BATTLE...!
Sepperin: (First phase) ...Is that all?
Iris: (Iris Stage 3 First phase) ...And so, the curtain falls! ♪
Iris: (Iris Stage 3 Second phase) Now THAT was fun! ♪
Iris: (Final Stage First phase) A worthless maggot to the very end! ♪
Iris: (Final Stage Second phase) Now do you understand the power of a God?

Freu: (Opening stage) Such a shame...
Freu: (Her stage) I expected no less.
Zorne: (Pre-Trau events) That's what happens when I don't hold back!
Zorne: (Post-Trau events) ...Trau, where are you...?
Trau: (Pre-Zorne events) Over already? You're not as tough as I thought...
Trau: (Post-Zorne events) *Huff* *huff* That was the best...
Luste: Heheheh! I'm the strongest! ♪
Tia: Couldn't we just talk this over...?
Sichte: ...Grolla... I...
Liebea: ...We're all doomed...
Schwer: ...This place is the best.
Raimund: (First phase) I AM DISAPPOINTED IN YOU...
Raimund: (Second phase) I SHALL JOIN YOU IN HELL, GROLLA.
Sepperin: (First phase) ...A fitting end for a traitor.
Iris: (Iris Stage 3 First phase) Over already? Well, you are only human.
Iris: (Iris Stage 3 Second phase) Now THAT was quality entertainment. ♪
Iris: (Final Stage First phase) This is your limit. ♪
Iris: (Final Stage Second phase) This is what happens to those who defy a god.

"But... the future refused to change."

"In the end... the future refused to change."

"The comfort of death will come, for men and demons alike...by the guidance of the Great Will."

And so the Shadow Queen engulfed the world with her foul magic... For Mario... For Peach... And for the world, it was...
GAME OVER

You have ignited a nuclear war. And no, there is no animated display of a mushroom cloud with parts of bodies flying through the air. We do not reward failure.

Infomaniac: Well it's not as bad as it looks. Well maybe it is. No, actually, you can just start again, or come back later if you want to! We'll be able to reconstruct. Err, maybe. Oh who am I kidding? Of course we can! We're the citizens of LEGO Island! So, start a new game, or exit through those doors, and come back when you want to visit again.