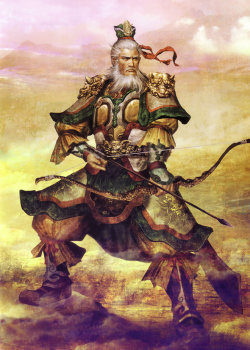 The Old Soldier is the grizzled veteran who has been through and seen everything in war. He would more than qualify for being a Shell Shocked Senior, both in age and experience, but he's still going into battle and odds are that he's the backbone of whatever unit he or (more rarely) she is in. This character type is almost never an officer or a commander, and is instead usually a Sergeant Rock. Generally you can expect them to be tough, to have a few badass scars, and to be eternally pissed off at (or at least exasperated by) the younger troops around him. Despite that, he may still turn out to be one of the best sources of mentoring or seasoning a young soldier can get.

Expect the Officer and a Gentleman to rely on him quite a bit in running the unit, ala Captain Smooth and Sergeant Rough. Ensign Newbie, on the other hand, will rarely know to do this or will actively tick off the Old Soldier in attempting to control a unit, a mistake he usually pays for. Despite the first page quote, old soldiers have about a 50-50 chance of dying in a work of fiction, but usually not until rather late in the story, generally in a Heroic Sacrifice of some kind or in a suitably impressive way. If this character dies early in a story, odds are you're dealing with a story on the cynical end of the scale, and that it's going to have a high Mortality rate.

If the soldier is too old to fight, but denies that fact, he may be a Perilous Old Fool.

Examples of Old Soldier include:

Retrieved from "https://allthetropes.org/w/index.php?title=Old_Soldier&oldid=1701985"
Categories:
Cookies help us deliver our services. By using our services, you agree to our use of cookies.