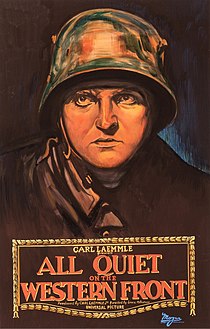 All Quiet on the Western Front (Im Westen Nichts Neues) is a 1929 anti-war novel, set during World War I, by famous German author and war veteran Erich Maria Remarque. It's considered to be one of the greatest and most important works in the genre.

Many of the elements of the narrative correspond to Remarque's own experiences, and the book has strong autobiographic undertones.

The book was a best-seller when it was first released. In 1930, an American film adaptation was made, directed by Lewis Milestone. It won the Best Picture Oscar and is often considered to be the Trope Maker of the modern war drama. An equally good TV adaptation was made in 1979.

All Quiet on the Western Front is narrated by a young soldier, former grammar school student Paul Bäumer. The horrors of trench warfare are described in a brutally realistic fashion. Further themes are comradeship and the soldiers' detachment from civilian life.

Tropes used in All Quiet on the Western Front include:
Retrieved from "https://allthetropes.org/w/index.php?title=All_Quiet_on_the_Western_Front&oldid=1912810"
Categories:
Cookies help us deliver our services. By using our services, you agree to our use of cookies.