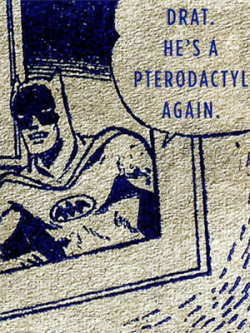 Batman had Seen It All fifty years ago.

A cat chasing a car? They've seen it. People playing card games for the fate of the world? They've seen it. They've explained the Noodle Incident twice. They even know what the Cow Tools are for. Yes, these characters have Seen It All.

They usually come in three types:

Most Men in Black are type 1. If it is a protagonist, they are usually a type 2. Villains and tricksters tend to type 3.

When the bored residents in an urban center have Seen It All, the trope is City of Weirdos.

See also "Seen It All" Suicide and Nothing Left to Do But Die. Not to be confused with Wake Up, Go to School, Save the World. Compare Fantastically Indifferent and Prescience Is Predictable.

Examples of Seen It All include: