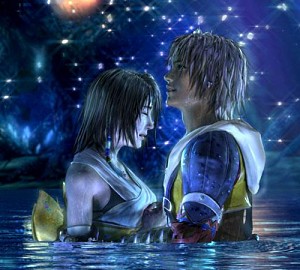 The tenth game in the mind-crunchingly popular Final Fantasy series.

Final Fantasy X was the franchise's first foray onto the PlayStation 2, with suitably eye-popping graphics and a story which holds its own in a game franchise loaded with great stories.

The plot starts off rather chaotically, with Kid Hero and sports star Tidus preparing for a game of blitzball- a combination of rugby and water polo- which is very popular in the futuristic, hi-tech metropolis of Zanarkand where he lives. No sooner has the game begun than a mysterious Ronin-in-Red (who knew Tidus's father) appears, and with him, a gigantic sphere of watery doom which swoops down upon the city, reducing it to so much hi-tech neon kindling.

Tidus manages to escape from this disaster with his life, but is soon sucked into a mysterious wormhole that spits him out into Spira, a strange and unfamiliar world filled with ruins and Lost Technology. He finds himself rescued from starvation by a Genki Girl/Gadgeteer Genius named Rikku, who tells him that his home city of Zanarkand does exist in Spira, but as ruins: it was destroyed one thousand years previously.

Tidus soon learns of a great monstrosity called Sin which terrorizes Spira, destroying everything in its path. There exists a ritual for temporarily stopping Sin, which involves a pilgrimage that ends in the ruins of Zanarkand. He meets up with a shy young Summoner named Yuna, whose pilgrimage to Zanarkand is just beginning. Finding himself taken with her, and wishing to solve the mystery of why he has been seemingly thrown one thousand years into the future, Tidus travels with Yuna as one of her Guardians.

During the journey, Tidus makes a variety of new friends (and enemies):

The enemies faced by Tidus and our heroes include a Corrupt Church, a Nietzsche Wannabe, and a not-so-Sealed Evil in a Can with an insidious way of perpetuating itself. Along with Final Fantasy VI, and FFVIII, it's thought to have one of the best plots in the entire game series, if somewhat more linear gameplay than its predecessors and having some questionable voice acting (and is a worthy introduction of the franchise onto the PS2 console). It was successful enough to go against form and inspire a true sequel Final Fantasy X-2, which takes place two years after Final Fantasy X and stars two of the three main female characters from that game.

Notable for having roughly the same plot as an earlier Squaresoft title, Bahamut Lagoon, which was lampshaded with Final Fantasy X-2's airship named Celsius: the airship in Bahamut Lagoon is called Fahrenheit.[1] Also notable for being the first game in the Final Fantasy series to include voice acting.

Final Fantasy X is the Trope Namer for:

And the former Trope Namer for:

Tropes used in Final Fantasy X include:
Retrieved from "https://allthetropes.org/w/index.php?title=Final_Fantasy_X&oldid=1871647"
Categories:
Cookies help us deliver our services. By using our services, you agree to our use of cookies.