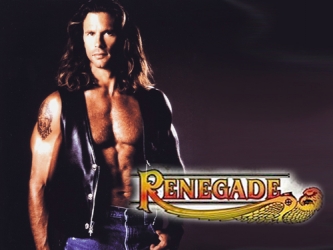 Reno Raines, a formerly well-respected policeman, is framed for the shooting of his girlfriend Valerie and the murder of another cop by Donald "Dutch" Dixon, and is forced to go on the run from the very law he used to uphold. Thus, his becomes a mission to find the evidence that will clear him; in the meantime, he works alongside noted bounty-hunter Bobby Sixkiller under the alias "Vince Black" to bring other criminals to justice.

Renegade starred actor Lorenzo Lamas in the titular role, and ran for five years, from September 1992 to April 1997, for a total of five seasons, 110 episodes in all. Seasons 1-4 ran on broadcast Syndication, with Season 5 airing on the USA Network. The series was one of several produced by the now-deceased Stephen J. Cannell.

By the way, this series is NOT related in any way to the Mass Effect/Command and Conquer fan-fiction story.

Tropes used in Renegade (TV series) include:
Retrieved from "https://allthetropes.org/w/index.php?title=Renegade_(TV_series)&oldid=1685620"
Categories:
Cookies help us deliver our services. By using our services, you agree to our use of cookies.