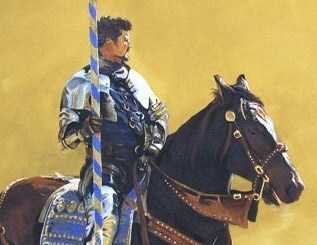 The medieval Knight Errant stems from the Chivalric Romance, where individual Knights In Shining Armor would wander the land, searching for evil to slay and ladies to rescue and whatnot, guided by the Damsel Errant. Since then, knights have declined in popularity, but the Knight Errant is still around in full force—instead of knights, they are now often cowboys, samurai, or Samurai Cowboys.

Historically a knight errant would refer to a landless knight who would travel with his lord in service and hope of earning his own land. If he is traveling because he was sent by someone it might be a case of My Master, Right or Wrong.

Knights Errant have some or all of the following traits:

There are many variations on the Knight Errant outside of Knights In Shining Armor. The Western very often stars a Knight Errant in the form of a wandering gunslinger or cowboy. Samurai are often, and Ronin are almost always, Knights Errant. Wuxia heroes are Knights Errant. Because of the shared archetype, stories about one type of Knight Errant can easily be Recycled in Space -- New Old West and Space Western are examples of this.

Examples of Knight Errant include:

Retrieved from "https://allthetropes.org/w/index.php?title=Knight_Errant&oldid=1498672"
Categories:
Cookies help us deliver our services. By using our services, you agree to our use of cookies.