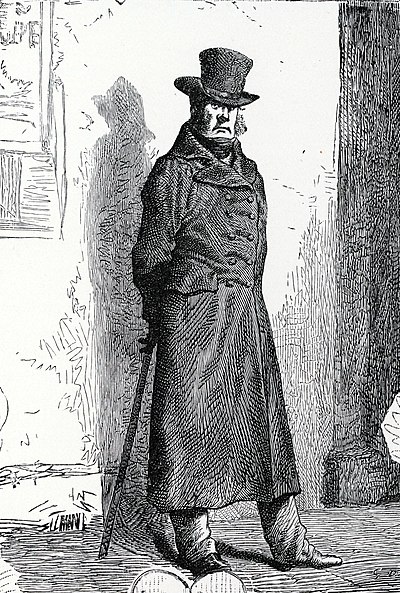 Inspector Javert is the well-intentioned law enforcement officer (or detective, or Bounty Hunter) who honestly (if sometimes wrongly) believes that the hero is a bad guy and doggedly pursues him in a Stern Chase, seeking to get him.

He does not realize that the hero is either Wrongly Accused, or has already redeemed himself for crimes done long ago. Inspector Javert may be the reason the hero has to keep moving among Adventure Towns. Often the only way to slow him down is to defeat other violent criminals, then leave them for the Inspector to arrest and process before he can resume the chase.

At some point, however, the officer and accused have to team up to fight a common enemy, or the movie or series ends with them discovering that their entire campaign to bring the hero to justice was in vain, or he is innocent and find evidence to prove it or they decide to just let them go with a "five minute head start", or something to that effect.

Named for the archetypal character in Victor Hugo's novel Les Misérables, and the subsequent musical. Lt. Gerard in The Fugitive was inspired by Javert, down to the French surname.

A Sub-Trope of Hero Antagonist. Very likely to be Lawful Neutral, but can also be outright Lawful Stupid.

Compare and Contrast Sympathetic Inspector Antagonist; the hero is a Villain Protagonist or Anti-Hero and that Inspector chases a real criminal. May be portrayed as a Butt Monkey and/or Worthy Opponent by the protagonist. See also Inspector Lestrade, where the inspector is The Rival to a detective protagonist.

Examples of Inspector Javert include:

Retrieved from "https://allthetropes.org/w/index.php?title=Inspector_Javert&oldid=1895133"
Categories:
Cookies help us deliver our services. By using our services, you agree to our use of cookies.