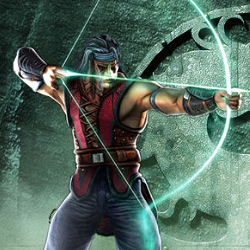 Stereotypical face paint? Check. Feather in hair? Check. The ability to manifest a bow and arrow made of pure spirit energy? Check!

A subtrope of Ethnic Magician. Native Americans, (or a race meant to be an Expy of them) that possess powers because of their ethnicity. Often this involves stating that their power comes from innate spirituality or closeness to nature that "civilized" races don't have. Usually involves influence over nature, animals, or other spirit powers. Quite often, the Native in question will be dressed very "traditionally" even in modern settings. If the Native American magic comes from beyond the grave, see Indian Burial Ground.

This is often a form of Positive Discrimination. Works often use this trope to promote a "positive" image of Native Americans rather than accurately portraying their culture or developing them as characters. Like Noble Savage, this trope can have obvious Unfortunate Implications. It furthers stereotypes of Native Americans and gives them a mysterious "otherness" quality.

Also, one of the sources of generic fantasy elves of wood-loving variety, sometimes followed so close it's hard to tell differences other than lifespan and sharp ears (often Noble Savage, but not necessarily so).

If this character is a superhero, see Captain Ethnic. See also Magical Negro and Magical Asian.

No real life examples, please; at least, not until we have evidence that supernatural abilities exist.

Examples of Magical Native American include:

Retrieved from "https://allthetropes.org/w/index.php?title=Magical_Native_American&oldid=1930943"
Categories:
Cookies help us deliver our services. By using our services, you agree to our use of cookies.