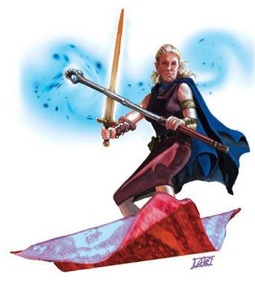 Most wizards are of the Squishy Wizard variety, able to work eldritch wonders but not take a punch. But not every wizard is squishy, as is proven by the Magic Knight. Whether he's a wizard who picked up a melee weapon and some spiffy armor, or a warrior who learned to cast a few spells, he is every bit as deadly with both spell and sword.

For the purposes of game balance, he'll either be weaker at spell and sword than a pure fighter or mage, generally slower, somehow otherwise limited to being defensive, or he'll be The Hero, who is expected to be the most powerful character anyway. Usually, the Magic Knight will specialize in a particular class of magic (attack or healing, for instance), effectively making him a hybrid of only two "classes", rather than being an out-and-out "Jack" of all trades. However, being a total Jack of All Stats is also possible, depending on the game.

Another form of balance may be found in their spell loadout. Instead of the wide variety of spells a normal spellcaster can use, they tend to focus on Status Buffs and direct attack spells. Other typical abilities for this class may include infusing their bodies or weapons with elemental powers. Doing the same with Standard Status Effects is not unknown either.

Older Than Print, as the Norse god Odin (who also made the Robe and Wizard Hat convention), was both an accomplished wizard and a powerful warrior.

If a Magic Knight is specialized in healing or defensive magic, anti-undead or anti-demonic powers or otherwise associated with a deity or "The Light", he is typically a form of Church Militant known as The Paladin. The Combat Medic is a similar concept, but tends to be a healer first and a warrior second.

Similarly, an opposite variety, which gains a different kind of magical prowess from being in league with, commanding or subjugating powers of darkness, undeath, or chaos, is called the Black/Dark/Death/Doom Knight. Prone to either being corrupted by their powers or starting off as villains and redeeming themselves but generally retaining their powers because Dark Is Not Evil.

For wizards that learn martial arts rather than using weapons and armor, see Kung Fu Wizard. Not to be confused with the genre-specific Magical Girl Warrior (not even the ones that call themselves Magic Knights). Compare Tin Tyrant.

Examples of Magic Knight include:

Retrieved from "https://allthetropes.org/w/index.php?title=Magic_Knight&oldid=1889232"
Categories:
Cookies help us deliver our services. By using our services, you agree to our use of cookies.