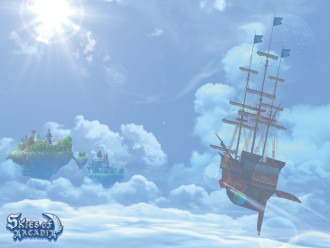 Skies of Arcadia is a Role-Playing Game for the Sega Dreamcast featuring pirates who sail the skies rather than the seas.

The story centers on Vyse, a young air pirate (long before Final Fantasy XII, mind) who, along with his best friend Aika, rescues a Mysterious Waif named Fina from the Valuan Empire. Fina is on a mission to gather six powerful crystals, but the Valuans want them too, because they are used to control six gigantic living weapons with enough firepower to devastate continents. Three guesses why they want them.

One of Skies of Arcadia's draws was the world the game took place in: Instead of the conventional RPG world of oceans, mountains, deserts, etc., Arcadia is a World in the Sky - islands and continents float in the air separated by vast stretches of open air - which is not buzzed through with aircraft but sailed in ships. This makes the Global Airship a prerequisite just for getting around. Another of the game's more charming features was its generally upbeat and optimistic tone: the vast majority of RPGs at the time, especially post-Final Fantasy VII, tended to feature Darker and Edgier themes with brooding heroes, making the courageous and impossibly optimistic Vyse almost seem retro-chic. Vyse, Aika, and Fina also stand out as one of the few main character trios who balance each other perfectly without descending into a dreaded Love Triangle subplot. Finally, the Dreamcast was severely lacking in RPGs, making this a solid draw for that particular crowd.

The game's setting also included an "Age of Sailing" undercurrent of discovery. As the characters seek the Moon Crystals, they also rediscover lands isolated or lost since the great disaster centuries ago. In addition, the overworld is filled with "Discoveries": places, creatures, and landmarks that are hidden in various places. If found, the knowledge of their existence and location could be sold for a tidy sum, if you were fast enough to beat your competitors to the punch.

Skies of Arcadia is one of those games that has a list of flaws a mile long (clichéd story, broken battle system, Random Encounters), but manages to be great fun despite (or arguably because of) that, even through multiple playthroughs. There's definitely something to be said for piracy in airships.

Skies was later rereleased on the Gamecube as Skies of Arcadia: Legends, which reduced the insanely high overworld random encounter rate and added a few Bonus Bosses and Sidequests.

Tropes used in Skies of Arcadia include:
Retrieved from "https://allthetropes.org/w/index.php?title=Skies_of_Arcadia&oldid=1930425"
Categories:
Cookies help us deliver our services. By using our services, you agree to our use of cookies.