By the Power of Grayskull

Everything About Fiction You Never Wanted to Know.
(Redirected from By the Power of Greyskull)
Jump to navigation Jump to search 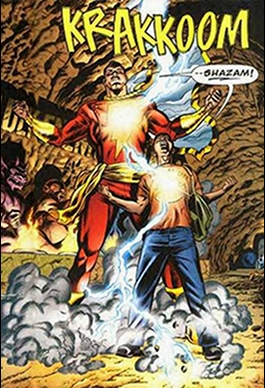 Lots of Phlebotinum is voice activated: Kirk talked to the computer, Michael talked to KITT, Automan talked to Cursor. But there is no place where a voice activation is more universally required than when triggering a Transformation Sequence.

You are, more or less, not allowed to transform to your super-powered alter-ego without ranting some special key-phrase. This phrase may or may not be descriptive, but it should almost certainly be pithy. If your transformation Catch Phrase is lame, you will not be allowed to keep transforming.

In situations where the hero explicitly cannot transform without magic words, rest assured that Easy Amnesia or a silencing attack will rear its ugly head at least once, making the change impossible when needed the most. If the phrase also untransforms the hero, expect him to do this by mistake sometimes. Villains in particular will often be tricked into saying their power-down phrases.

And woe betide anyone who mispronounces the transformation phrase, as horrible, horrifying things may result.

The trope originated with comic-book character Billy Batson, who first used the Catch Phrase "Shazam!" to transform into Captain Marvel in 1940.

A common Anime phenomenon, where it may be a form of Calling Your Attacks. In the Japanese dialog of Sentai and Anime, the word "Henshin"—meaning roughly "change" or "transform"—is often found in the phrase, and is sometimes the entire phrase.

This is the magic Catch Phrase that actually causes or facilitates the transformation. For one that is simply a cool kind of rallying cry or way to get the adrenaline pumping ("Flame On!", for example), see Invocation. When either of these contains (or is) the name of the hero's new form, it's Transformation Name Announcement.

See also: Transformation Trinket
Examples of By the Power of Grayskull include:

Retrieved from "https://allthetropes.org/w/index.php?title=By_the_Power_of_Grayskull&oldid=1778851"
Categories:
Cookies help us deliver our services. By using our services, you agree to our use of cookies.