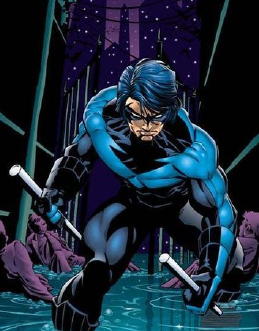 A man's got to go his own way.

Nightwing is the solo-code name of Richard "Dick" Grayson, the first Robin. After years of training under Batman the Then-a-Teen Boy Wonder decided that, as the image quote says, "A man's got to go his own way". Thanks to the nature of Comic Book Continuity, this was either after a long over-due fight with Batman where Bruce fired Dick, Dick quit, or they happily shook hands, acknowledged the need to grow up, and shared some Alfred-made Bat-cocoa. In any case, Richard came upon the name Nightwing after hearing the tale of a Batman & Robin-esque pair of Kryptonian vigilantes from Superman named Nightwing & Flamebird. Taking the name, he made his debut in Teen Titans during the Judas Contract story-line. The Nightwing persona debuted in Tales of the Teen Titans #44 (July, 1984)

Eventually he was given his own self titled series. A 4-issue Nightwing mini-series turned up in 1995 and was well-received. An ongoing naturally followed. Lasting for 153 issues, from October, 1996 to April, 2009. Nightwing was a series starring Dick Grayson, the original Robin, graduated to become protector of Gotham's neighboring city of Bludhaven. The series was initially written by Chuck Dixon. Quite well received, it started creating a Rogues Gallery for Dick Grayson and helped distinguish Nightwing's solo methodology from Batman's own. The series was eventually taken over by Devin Grayson.

Controversies abounded in the title and it was eventually canceled as a preparation for Infinite Crisis and rebooted. The city of Bludhaven was destroyed by the Secret Society of Supervillains and Dick Grayson was relocated to New York City. The new series was even more poorly received and eventually canceled. Dick Grayson has recently graduated to become the new Batman in Battle for the Cowl.

With the company wide New 52 relaunch in 2011, Dick has returned to being Nightwing and has his own solo title.

Not to be confused with the killer bat flick of the same name.

The character exhibits the following tropes.[1]

Tropes used in Nightwing include:

]
Retrieved from "https://allthetropes.org/w/index.php?title=Nightwing&oldid=1846474"
Categories:
Cookies help us deliver our services. By using our services, you agree to our use of cookies.